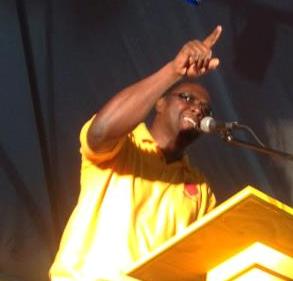 Sport Minister Patrick Simmons has blamed repayment of National debts as the main reason why the ruling National Democratic Congress was unable to fulfill all its plans and promises to the people since taking up office in July 2008.

Addressing a political rally of the NDC on Sunday in the parish of St Andrew, Simmons who will be contesting one of the four constituencies in the parish said that since taking up office the NDC has repaid more than EC$350 million in debt.

“Because of the repayment of these debts, we have ourselves in a position where we are unable to treat and deal with issues as we will like to, it has affected our plans,” he told the massive crowd of supporters who had gathered at the Carlton Junction the eastern parish.

Claiming that New National Party which was voted out of office in 2008 after serving for 13 years is responsible for high national debt, Simmons said that during the thirteen years the previous NNP administration undertook guarantees for loans and project that did not bring any benefits to the country.

NOW Grenada is not responsible for the opinions, statements or media content presented by contributors. In case of abuse, click here to report.
Tags: debtelectionndcpatrick simmons
Next Post