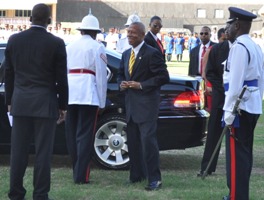 As other islands in the Caribbean continue to put structures in place to adjust to the many challenges of the impact of the downturn in the global economy, Prime Minister Tillman Thomas said on Thursday that Grenada has stemmed the tide and turned around a difficult situation with limited resources.

“Most importantly, we have begun the process of economic and social transformation, bringing improvements to the lives of the Grenadian people,” Thomas said while addressing a national rally in observance of 39th anniversary of Independence on Thursday.

“We have experienced tremendous gains in Agriculture with an average growth of 10% over the past three years. This as a direct result of our farm labour support, equipment support, fertilizer and our motivated farmers. We have seen substantial improvement in our human resource with the restructuring of the educational curriculum to include skills development,” he said.

Thomas told thousands who had gathered at the Grenada National Stadium for the 39th Independence Celebrations that the island’s social safety nets have been reorganized, consolidated and expanded to deliver more benefits to our citizens.

“The refurbishing and expansion of many schools, teacher training and hundreds of scholarships for our youths have begun to transform our educational landscape. Our youth development programme and the Grenada Cadet Corps is instilling discipline, importing knowledge and empowering our young people,” he said, while explaining that Grenada’s prudent economic management has brought some measure of fiscal stability and has laid a sound platform for future growth, pursuing our five economic pillars.

“As part of our good governance agenda, we have strengthened our democratic institutions. The merit system is taking root in the police force and the public service and individuals are appreciating this. On the international scene, more doors and opportunities are opening up for Grenadians in response to our good management philosophy and practices,” he said.

He further elaborated that in addition to the many difficulties and despite the challenging times, his Government was able to preserve all the jobs in the public sector. “We did so when some were taking salary cuts and others lost their jobs even in developed countries,” he said.