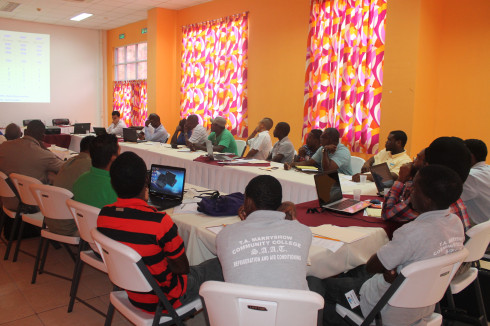 This story was posted 9 years ago
in Business
16 min. read

Members of GRAVA engaging in a recent training session
Share

Membership of the Grenada Refrigeration, Air-conditioning and Ventilating Association (GRAVA) at a Special General Meeting on Thursday, 4 April 2013, elected a new President to govern the affairs of the Association.

The new President, Mr. Augustine John was elected unopposed by the members present at the meeting.  Mr. John who is a former school principal and a former Government Minister of the New National Party administration of 1999 to 2003, pursued his studies in Refrigeration and Air-conditioning in Germany and brings more than twenty years experience to the executive.

In his acceptance speech, Mr. John thanked the members for the confidence they have placed in him and pledged his full commitment to advance the aims and objectives of the association.

As part of his early responsibilities as President, the members issued a mandate to Mr. John to undertake as a priority the following activities:  constitutional review, establishment of working committees, a newsletter publication and a review of the current annual work plan of the association.

The meeting was called after outgoing president Mr. Henry Frederick tendered his resignation on 08 March 2013, having served in the position for approximately four months.

The National Ozone Unit would like to extend congratulations to Mr. John and wish him well in his tenure as President of the Grenada Refrigeration, Air-conditioning and Ventilating Association.

NOW Grenada is not responsible for the opinions, statements or media content presented by contributors. In case of abuse, click here to report.
Tags: acassociationconstitutiongravarefrigeration
Next Post