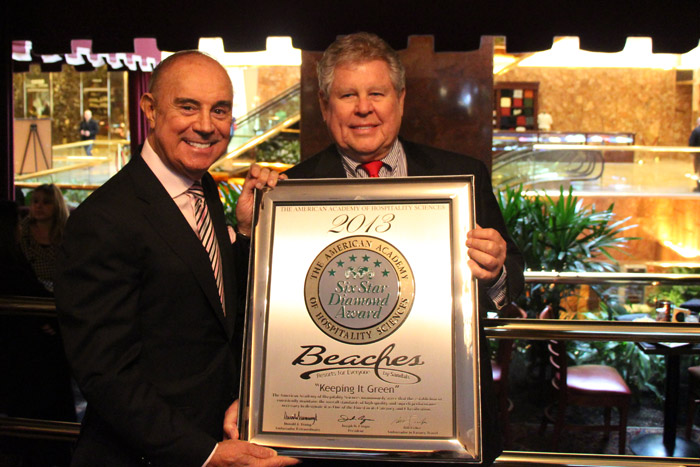 This story was posted 9 years ago
in Business
1 min. read

Sandals Resorts International, which is currently expanding the former La Source Hotel here, has swept the five diamond star accolades. The American Academy of Hospitality Sciences bestowed 23 of its top five and six star rating to various Sandals resorts, villas, restaurants and Island Routes Tours in the Caribbean. AAHS President Joseph Cinque presented the highest accolade to Butch Stewart, Chairman of Sandals and Beaches International, and Adam Stewart CEO, of Island Routes Caribbean, who together, along with an incredible team, are leading the way for luxury hospitality in the Caribbean and around the world! The event took place at Trump Tower in New York City. Over the years Sandals Resorts have perfected the all-inclusive concept, placing it among the best in the industry.

Furthermore Island Routes Tours has become the only tour company to ever receive a Six Star Diamond award from the American Academy of Hospitality Sciences. Island Routes Caribbean Adventures are showcasing culture, beuaty natural resources, sight and sounds that define the Caribbean making them the World’s Leading Caribbean Adventure Company. The Luxury Included brand is due to open its first resort in Grenada in December of this year.

NOW Grenada is not responsible for the opinions, statements or media content presented by contributors. In case of abuse, click here to report.
Tags: hotelluxuryresorttourismvilla
Next Post