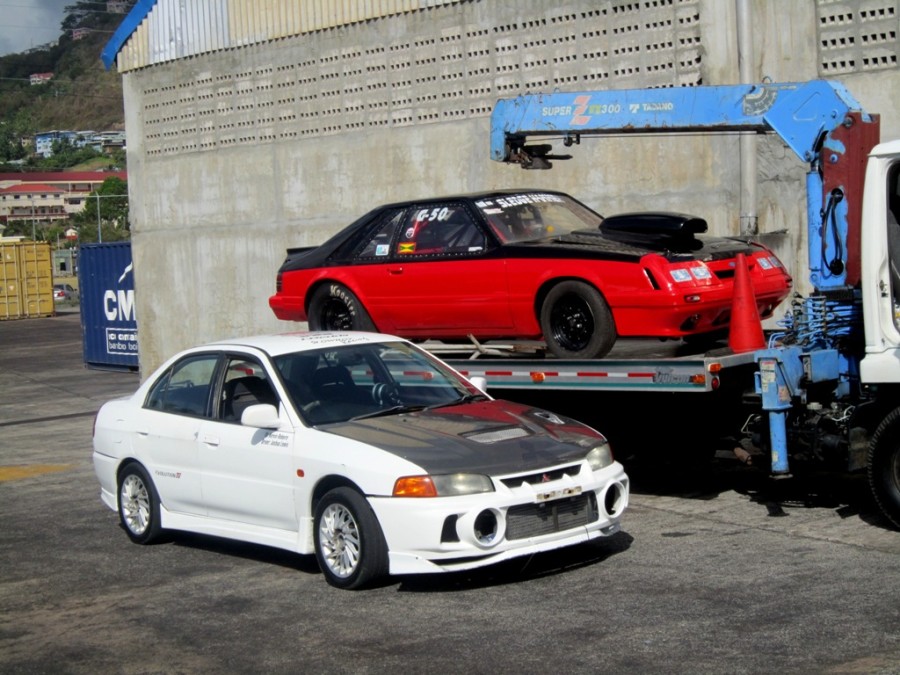 This story was posted 9 years ago
in Sports
3 min. read

Left: Joshua Lewis' TOTAL Lubricants' Mitsubishi Lancer Evolution IV Right- Alan Mc Intyre's "Sledge Hammer" Ford Mustang
Share
Two local race cars were strapped in a twenty foot cargo container as they depart to participate in what is turning out to be the biggest Drag Racing Event in the English-speaking Caribbean. The Base at Vieux Fort, St Lucia will be the venue to be on Saturday 27 April and Sunday 28 April 2013, as Absolute Promotions stage their 4th Annual “Drag Wars Retribution” Drag Racing Event.

Already booked is a huge list of contingents from Trinidad & Tobago, Grenada, St Vincent, Antigua & Barbuda, St Maarten, St Kitts & Nevis, The Cayman Islands, Tortola and of course host Country, St Lucia. The Sea Port, Airport, hotels, car rentals, supermarkets, restaurants and bars are all expected to benefit from the thousands of attracted overseas/international drag racers, crew and spectators attending the event. Sports Tourism is intensifying and the St Lucian Government has pledged their support and recognizes drag racing as a major sporting activity since revenue is being pumped in the economy with international events of this magnitude.

Representing Grenada for the fourth time are local veteran drag racers Alan McIntyre and Joshua Lewis. Grenada’s fastest car, the “Sledge Hammer” Ford Mustang, is expected to disturb any challenger in the 9 seconds bracket. Competing with a damaged engine last year, driver Alan McIntyre, still managed an impressive 9.79seconds in the quarter mile and seized third place in the 9seconds bracket. After rebuilding his eight cylinder engine with upgraded ported heads and tweaking the car’s suspension for St Lucia’s sticky track, McIntyre feels confident in taking down his opponents and to be victorious in the 9seconds bracket. “I’m going to give it my best and enjoy it at the same time” says McIntyre while strapping his Ford Mustang in the container.Auto tuner and drag racer Joshua ‘JL Tuning’ Lewis will also represent Grenada at St Lucia’s Drag Wars. Lewis did his Country proud last year when he secured second position in the 11-seconds bracket with a blistering best time of 11.22 seconds in his infamous Mitsubishi Lancer Evolution III. This year, he will pilot his other race car, the newly branded TOTAL Lubricants’ Mitsubishi Lancer Evolution IV. The fully modified Micro Tech powered Evolution did an amazing 11.3 seconds several weeks ago at the Grenada Motor Club’s Stag Drag Fest held at Pearls Airstrip. Without a doubt, Lewis’ Evolution will be the main contender in the 11 seconds bracket and he’s hoping to achieve a personal best time of 10.8 seconds with his new setup. “I’d like to thank my sponsors, family and fans for their continued support over the years and I’m excited to represent my Country once more” says Lewis over a telephone conversation in Trinidad & Tobago. Lewis is presently assisting and tuning a few Trinidadian race cars that are making the St Lucia trip.McIntyre and Lewis will be accompanied by their crew members forming a Team of sixteen persons and would depart for St Lucia on the morning of Thursday April 25th, 2013. Team Grenada would like to thank their sponsors; TOTAL Lubricants, Grenada Distillers Ltd, True Blue Bay Resorts & Villas, Knights Autoworld and Bananas Night Club for making it possible to represent Grenada once more at this regional event.Visit (and like) our Facebook page at www.facebook.com/gndraceteam for LIVE updates from St. Lucia beginning Thursday 25th, April 2013

Best of luck to our Grenadian contingent! #Respect the Nutmeg!

Article & Photo by Ravi Benjamin
NOW Grenada is not responsible for the opinions, statements or media content presented by contributors. In case of abuse, click here to report.
Tags: cardragenglishraceregionsportwar
Next Post