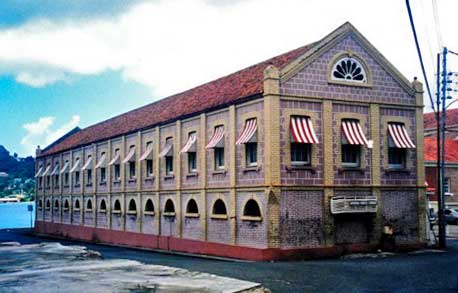 In a recent Sentinel article, brief mention was made of the abandoned Public Library building on the Carenage and the decay of York House. This article seeks to elaborate further on the Public Library – a major heritage building in the Historic Village of our Capital City of St. George.

Our records show that the building has been vacated and closed since July 18, 2011, in another month or two it would be two years since the contents of the building would not have seen the light of day, with the resulting deterioration of the irreplaceable archival material contained therein, and the loss of a large component of our documented history, which does not seem to be of concern to the powers that be.

This elegant Georgian building with civic proportions is the property of the Grenadian people, like every other State property; and is maintained or refurbished, as the case may be, by the government of the day.

The building was constructed circa 1720 in brick and stone with fish scale clay tile roof, and was originally used as a merchant’s office on the first floor and a warehouse at ground level. Up to 1985 the warehouse remained functional, as the metal rails on the ground floor which conveyed the commodities on large metal trolleys across the road, to and from the storeroom (warehouse) to large wooden “lighters,” were still in existence. In the early days the lighters were berthed up to the water’s edge, which took the commodities to and from the waiting cargo ships in the outer harbour, as there was no pier in the inner harbour at that time.

From about 1950, through the tireless effort of Librarian – the late Sheila Buckmire nee’ St. Bernard, the interior of the first floor of the building was remodelled to house the Public Library, and much later in 1986 the warehouse on the ground floor was included for library purposes, as the need for such services expanded.

In 1985 or thereabout, the government of the day received funding from the European Union, and the interior of the entire building — (Ground and First floor), was redesigned and repaired together with exterior walls and roof, and became the Grenada Public Library building. Twenty-seven (27) years on, as far as the Sentinel is aware, no major maintenance by the Ministry of Works was undertaken, the effects of which, has resulted in the building now designated as “not fit for human occupancy”, and was abandoned in July 2011.

Grenada is a signatory to the World Heritage Convention, and the Public Library building, York House, Govt.  House and the Market Square — as with so many others of our built heritage and sites, appear to have fallen through the cracks, as the powers that be, appear not to be concerned in upholding the requirements of the convention, to the detriment of our natural and cultural heritage.

There is a mind-set, even among some of our top politicians, would-be intellectuals and decision makers, that old is valueless, and that historic structures remind us of slavery, from whence we came.

Like it or not, historic buildings and buildings generally, are an indelible part of our culture, as the extent of their physical presence is the most visible man-made symbolism that identify our civilizations, from time immemorial. Beginning from the cave-man to the Ajoupa, to the dwellings of our Antillean forefathers, to the colourful creations of our Caribbean Vernacular homes, to the Great Houses and Slave Pens -onto the Pyramids, not excluding the great wonders of the world, and of course the discordant symbolism of corporate capitalism, as expressed in the opulent and ostentatious edifices of banks and insurance companies in the modern world, while absconding with their clients hard earned financial resources, which plunged the world into an economic tailspin.

Most of the developed or so called first world countries that have prospered, used slavery as the means to prosperity, even so, they continue to prosper by setting the rules for global commence, trade and finance and are just as pro-active in the preservation of their culture, by show-casing their built heritage which contributes to a  “money spinning” Tourism Product, as millions of visitors (tourists) continue to enjoy the wonders of these ancient structures and sites as part of the Outstanding Universal Creation of mankind.

In Grenada, the little that we have inherited, when compared with the metropole – are regarded by some, with a measure of contempt, forgetting that they are the product of the slave labour of our ancestors, which should be cherished and enhanced and used as a stepping stone onto the present, while shaping the future, which cannot be divorced from the past.

The sooner we “come to grips” with this reality, the sooner we would be able to move forward, as we attempt to forge our identity as part of a unique Caribbean Civilization — slavery notwithstanding.

A Willie Redhead Foundation Presentation
May 3, 2013.

NOW Grenada is not responsible for the opinions, statements or media content presented by contributors. In case of abuse, click here to report.
Tags: architecturegeorgianheritagehistorylibraryparliamenttwrfyork
Next Post