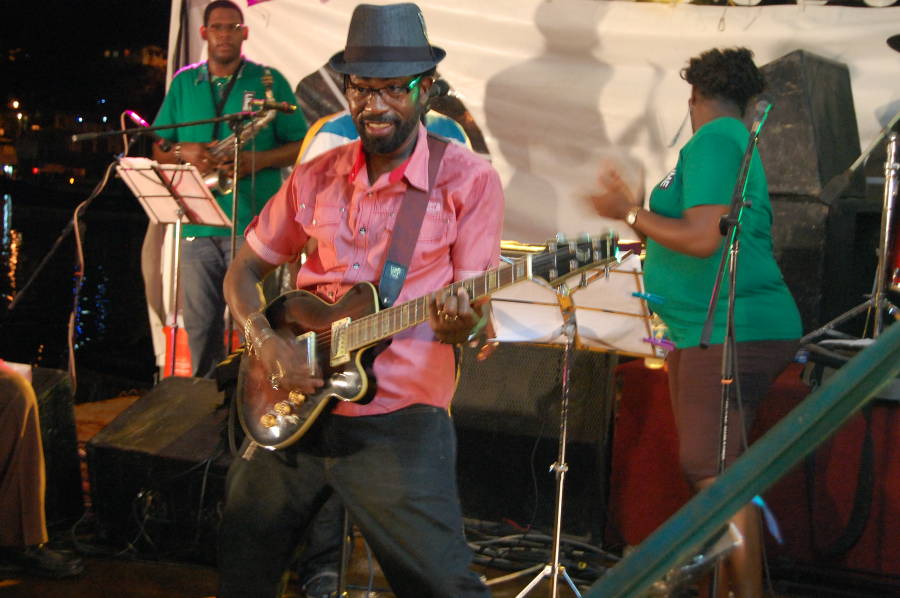 The Grenada Spice Mas Corporation is promising an action-packed Carnival Season with plenty of pomp and pageantry. The 2013 season got off to a bright start last week Saturday, with various acts of the festival on show on the Carenage.
The Vieux, Shortknees, Wild Indians, Pretty Mas, Jab Jabs, Steel Bands and Calypsonians, thrilled the thousands, who converged with moving performances.

Carnival is guided by the theme “Deeply Rooted in our Rich Ancestral Tradition, Steel Pan, the Sweet Sounds of Spice Mas”.

The opening was threatened by rain, which however failed to put a damper on the occasion, as the umbrellas went up in numbers.

No one retreated — an indication that they are ready for the eight weeks of non-stop action that climaxes 12 and 13 August. Senator Hood said, that government has gone out of its way to make the festival a big success. “The fact that the government has put so much into this Carnival, tells you that it recognises the importance of the festival to the economic development of the country.” She promised an action-filled season.

“This Government and my Ministry of Tourism, Civil Aviation and Culture, are pledging full support and are making a herculean effort to demonstrate our commitment to our stakeholders,” Tourism Minister Alexandra Otway Noel declared, adding that subventions and other forms of assistance are being distributed much earlier than usual on this occasion.

“It is with satisfaction that I tell you that we have already paid some of the subventions to Spice Mas Corporation. I am also pleased to say here today that during the course of the next week, 30% of the subventions will be distributed to the various stakeholders of Mas”, she said. The Minister also encouraged nationals to participate in the festival and help to make it a true success.

Former hits“Dance” by Inspector, “High” by Luni Sparks and Electrify and“Music Man”, by Ajamu and others shook the Carenage. A pulsating performance by Seven Times Calypso Champion Ajamu, had fans on their feet, reveling and looking forward for a great Spice Mas 2013.

PM Mitchell Calls For Sporting Academies In The OECS