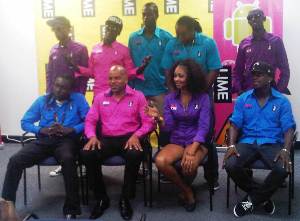 General Manager of LIME Grenada said that artistes for the carnival season who have signed a contract with his company will not be restricted from performing at any event organised by Digicel — the other mobile telecommunications provider on the island.

“They will not be restricted from performing, but they will not be able do and say some things such as endorsing the other provider,” said Steele, who explained that the contract signed with four new artistes and renewed with four others who were contracted in 2012, is individually based for a period of 12 months.

“Without their efforts, talents and creativity, the Carnival season could not flourish. We rely on them to set the pulse for the festival, to build the hype and excitement around the various events, to create the rivalries that bring out the best in each of them on the big stage,” said Cecil Noel before the artistes signed the contracts.

Noel said that LIME’s direct support for promising and talented artistes is in alignment with its support of culture in general. “Our support for mas bands, pan and cultural activities of all kinds is well documented,” he said, while explaining that Spicemas is also a major driver of the economy, and as a corporate citizen they cannot ignore its importance to the overall success of businesses — both large and small.

LIME is the Platinum sponsor of Spicemas 2013, and it is expected to pump almost EC$1 million to the event through direct financial contribution and supporting other activities that are organised by independent promoters. (LS)

NOW Grenada is not responsible for the opinions, statements or media content presented by contributors. In case of abuse, click here to report.
Tags: calypsocarnivaldigiceleventfestivallimemusicsocaspicemassponsortourism
Next Post