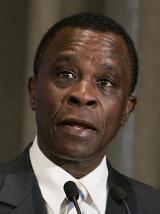 PM Mitchell said he let down the country in September 2004

PM Mitchell said he let down the country in September 2004

Almost nine years after the passage of Hurricane Ivan Prime Minister Dr Keith Mitchell has revealed why he removed the National Security ministry from his portfolio and requested the resignation of then Commissioner of Police Fitzroy Bedeau.

“As you will recall, in 2004 when Ivan came how the entire force let us down. I let down the country as the Minister for National Security. I disciplined myself as Minister and I removed myself as minister at the time because I felt I let down the country,” said Dr Mitchell who back then passed on the National Security Ministry to Sen. Einstein Louison.

“I similarly asked the Commissioner of Police and top members of the Force to do likewise,” said Dr Mitchell, who was re-elected to lead the Country following the General Elections this year. “That decision was not based on personality, it was based on principle. So if I can do that to myself, it tells you that I am more interested in principle than personality,” he told reporters during his first officially news conference as head of the Cabinet.

While it is not clear which other top members of the Force resigned in the aftermath of Hurricane Ivan, records have shown that then then Commissioner Fitzroy Bedeau handed over the leadership of the Force to Winston James. In 2008 following the 28 July General Elections in which the National Democratic Congress led by Tillman Thomas became the new administration of the country, James handed over the title of Police Commissioner to Willan Thompson. The return of the NNP administration on 19 February has seen the Thompson taking administrative leave, while James has returned as Commissioner.

On 7 September 2004, Hurricane Ivan, a category three hurricane devastated Grenada destroying 90% of the country’s housing stock — this was the first Hurricane to batter Grenada since 1955. In the immediate aftermath of the hurricane, members of the Force were believed to have engaged in activities that failed to secure the business community, and their action exposed many businesses and private property to looting and other unlawful activities.

NOW Grenada is not responsible for the opinions, statements or media content presented by contributors. In case of abuse, click here to report.
Tags: commissionercopelectionhurricaneivanlinda strakermitchellnnppolicergpf
Next Post