So Much More Seems On Hold

So Much More Seems On Hold

This story was posted 9 years ago
in Law, OPINION/COMMENTARY, Politics
5 min. read

The ups and downs, and the on or off of the current Leadership position surrounding the NDC Party — after five months of having been totally rejected by the voters in the last Elections — that level of uncertainty seems to be getting a lot worse rather than any better, as the time moves on and the party in control of State power consolidated its leadership, with no opposition to question any move.

The unanimous victory of February nineteenth, was not the first time the NNP had won all the seats in the general election — but this clean-sweep seemed to have taken a heavier toll on the NDCites than any other defeat in the past.

And as the party prepares itself for the upcoming convention, at which the entire Executive is usually elected — including the party leader for the next year — there is so much ole talk, and denials and contradiction coming from the current leader, that it all leaves many to wonder what is behind it all.

As one observer put it to me, after reading the latest statements in the press on the matter — that crushing defeat last February, seemed to have taken all the steam from those democrats’ political engines, to the extent that they are non-functional and in limbo.

And because of that state of apparent non-existence, the leaders in control of the reins of power are able to do, or make statements as they please — and despite all the grand promises they made which won them the total control they are now enjoying, the losers are so disorganised and seem to be all doing their own thing, they are not even expressing a passing observation about the non-performance of those promises.

And strange enough, the other party (NUF) or however it was called — their losers at the polls are just as quiet as the NDC lot, so that it looks as though the massive NNP victory, stifled all the political fire they were spreading during the campaign.

Nowadays we are hearing nothing about those foreign investors, who were lined up and ready to come in and invest their millions to provide thousands of those much needed jobs for our people.

Instead, the emphasis from the controllers seems to be concerned with the billions of dollars in foreign debt our government is owing all over the globe — not to mention the debts being owed right here to locals.

And the way that the stories are being published, tend to lay the blame solely at the bad performance of the NDC lot during their four and a half years in control.

But because the losers at the polls are now so disorganised or disunited, or both, as well as other skeletons in the closets that are keeping them all so very quiet on matters of national interest — no response is forthcoming from them, and the controllers are very conveniently using the silence to their advantage.

But it was all very well known, that when the NDC took over control of the nation’s affairs in July 2008 — the debt then owing by the NNP Government, which was in control since 1995 for three consecutive terms, was over one and a half billion dollars or thereabout.

True enough it was increased, because there was nothing on stream in 2008 to help pay even the interest on the debts — so naturally it kept on increasing, and with additional loans or whatever the sum owing now is nearly two and a half billion dollars — it is rumoured.

But because the losers are so disunited, for one reason or another, nothing of substance is coming from the executive at any level.

It all looked as though the party has ceased to function, because except for the denials and the on or off position of the current party leader, ex-Prime Minister Tillman Thomas — everything else seems to be on hold pending the upcoming convention later this year.

And from the bits and pieces coming through the grapevine of party sources, the fight for the leadership position to control the executive for the next year or whenever — that is already beginning to show signs of a much wider field of interested members with an interest in leading the party.

The person chosen should be the one who must start rebuilding the organization from now onwards, and who will be facing up to the government in control, and keeping the people fully informed of the party’s position — on all the various issues as they arise in the course of the nation’s business.

And the fact that the party has three senators in the Upper House — whether one of them is chosen as the leader or not, should make no difference to the party’s position being fully expressed in that chamber by any one of them.

In fact it can be very strongly argued, that the ex-Governor General was surely thinking along those lines, when he decided to appoint those three party members in the absence of any opposition in parliament — so as to bring some balance to discussions, when the nation’s business is being debated and decided upon.

This is not happening in the Senate thus far, and the party should be looking into that aspect as the only official party organ in the country since elections.

And when the executive is being elected in the upcoming convention, those holding any position should be stressing that responsibility for the new executive members who will be taking over control of the party for the next year or so.

There is nothing the defeated party can do when it comes down to the nation’s business in parliament — except for the voices of the three senators in the Upper House, even though they cannot change anything that had passed through the Lower House.

But at least, as a responsible party just a few months ago in control of the nation’s affairs — they should be very much more vocal and pointing out the controllers shortcomings, in the interest of the many thousands who voted NDC last February.

But the fact that this is not happening, is giving ample food for thinking that all is not very well in the current Executive.

The controllers in power, made all kinds of promises of investors ready to come on the Island, with huge programs to provide jobs for all who needed employment.

Since taking over control over five months ago those promises seemed to have disappeared along with the investors.

But rather than questioning the situation – the losers seem to be heading for a very rowdy convention, over the leadership and the executive as a whole.

We can only wait and keep on listening — in the hope that things will change in the not-too-distant future.

NOW Grenada is not responsible for the opinions, statements or media content presented by contributors. In case of abuse, click here to report.
Tags: conventiongovernmentlaw & politicslloyd noelndcnnpoppositionpolitics
Next Post 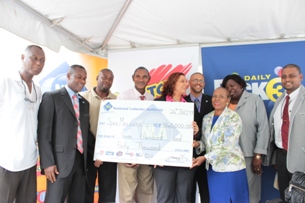