Sandra Ferguson Among Representatives Who Met With UN Official

Sandra Ferguson Among Representatives Who Met With UN Official 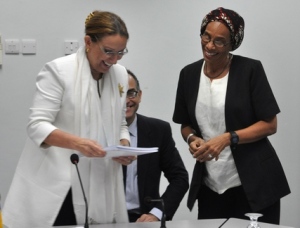 Social advocate and lobbyist Sandra Ferguson was among representatives from the various Caribbean Civil Society organizations who recently met with UN Under-Secretary-General and UNDP Associate Administrator Rebecca Grynspan during a session in Barbados.

In the margins of the 3rd Interregional Preparatory Meeting of the Small Island Developing States in Barbados, UN Under-Secretary-General and UNDP Associate Administrator Rebecca Grynspan met with civil society from across the Caribbean region, as part of the United Nations Development Programme (UNDP) ongoing dialogue with non-state actors.

Ms. Grynspan told Ferguson who was there in her capacity chair of the Grenada Inter-agency Group of Development Organisations, and the other persons who included representatives from women’s groups, youth organisations, and farmers networks, that UNDP intends to further strengthen its dialogue under its strategic plan for 2014-2017, which will be launched in September.

Ms. Grynspan said that the Millennium Development Goals (MDGs) have progressed quickly because civil society had pushed to see that they were achieved. Civil society had utilized the platform that the MDGs offered to hold governments accountable for their progress towards the goals.  She said that civil society’s active engagement would also be important in shaping the post 2015 development agenda.