The Waiting For Action Continues

The Waiting For Action Continues

The pledge or promise to have the economy up and running again, and jobs for the unemployed available — from the many foreign investors who were ready and waiting to come ashore and start up new businesses in the Spice Isles, at the beck and call of the new controllers all in the first hundred days sweeping the polls — is still pending after two hundred days or six months.

True enough, quite a number of road maintenance workers have found jobs, and the potholes and roadside jungle of bushes have been filled up and cleared away — and the works have been continuing.

But as far as the new investors are concerned, nothing has happened in that area, except that the Government has enacted a New Foreign Investors Citizenship Act, which is intended to grant Grenadian Citizenship to Foreign Investors who are willing to come and invest in the Tri-Island State.

What is not very clear — is whether those investors have to start up their businesses before they receive their Citizenship and Grenadian Passports, or these will be given in advance of their coming; as happened under the previous scheme when all sorts of crooks and con-men received passports, and our genuine Grenadians were denied entry into Canada especially, unless and until they obtain a Canadian Visa

There is no denying that our people are undergoing serious economic pressure, because of the lack of employment to earn a living wage — and the current controllers had made very firm promises, of interested investors who were waiting for those now in charge to take over the reins of power, and they would have been on the island in days.

Now we have gone through xix months of complete and total control by the new rulers, and the silence is deafening.

Instead of investment and job-creation, for those who fell for the promises and voted green to replace the yellow-wearers — we are now hearing of all the debts and loans inherited by the winners, and even more recently the many Government properties sold by the losers while they were in power, and now the winners want to buy them back for use by Government departments.

The properties are nearly all located in the parish of St. George, and the list of those published shows that they need major repairs and have been in disuse for years — so how wise is the decision to repurchase and repair those buildings, only time will tell.

The news from the financial sector of the Government operations recently, has been the receipt, or promise, or loans of millions of dollars from governments or other foreign institutions to the Government of Grenada.

And in the same releases on the question of finance – has been the dis-closure that the last Government had not been servicing the huge debts owed by Grenada, but instead had been adding millions to those debts.

If that state of affairs is as published, it is surprising to hear the same, or other lenders or donors still ready and willing to make more millions available to the new guys in the corridors of power.

But then again it could be argued, that no matter what the past conditions may reveal — those with friends and comrades in the right places, can always succeed in getting them to go above and beyond the usual channels.

So now that all those promises are in the pipeline, the talks about the many millions are being bandied about in most news bulletins from the powers–that–be, and the months are moving along with nothing of any consequence taking place, to ease up the hardships and the tension so many people are undergoing — the cries of those in the jobless wilderness are rising with every passing pay-less week, as they wait and keep on hoping, that sooner rather than too much longer the existing hard-times will be reduced by the Controllers in Charge.

And now that the carnival is over, the school holidays are nearly also coming to an end, and while all those who have graduated are joining the jobless, with very few lucky ones finding something to occupy their time for a paycheque at month-ends, another set are about to enter Secondary School in early September, and the strain and headaches for their parents to find the means to equip and turn them out are beginning all over again.

I saw and heard the Prime Minister on TV last week informing the Nation that in the next three months, over ten thousand jobs will be provided for the jobless, from the plans and programs now in the pipeline and ready to come on stream in the coming months in the Spice Isle.

If that promise materialises, while it would not solve all the jobless problems, it will surely make a whole lot of difference to those in need and looking to find work to feed themselves and care for their families.

We can only hope and pray that some things do take place to ease the tension and bring some relief — because the situation is rough and the waiting for action is very frustrating, and will only get worse if nothing concrete comes up in the very near future.

NOW Grenada is not responsible for the opinions, statements or media content presented by contributors. In case of abuse, click here to report.
Tags: employmentforeigninvestmentlaw & politicslloyd noelpolitics
Next Post 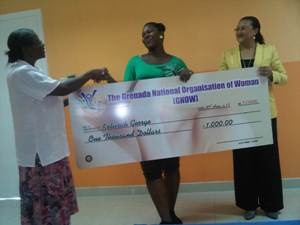