How Soon Will Cuba Be Given The Option To Join Caricom?

How Soon Will Cuba Be Given The Option To Join Caricom?

The 34th Regular Meeting of the Conference of Heads of Government of the Caribbean Community (Caricom) was recently held in Port of Spain, Trinidad. At the end of the conference, Prime Minister Freundel Stuart of Barbados disclosed to the media that efforts are in train to encourage non-Caricom member states in the region to join Caricom. A hint was given that such states as the Dominican Republic, the French states as Martinique and Guadeloupe, the Dutch islands as Aruba and Curacao are being given due consideration. However there seems to have been no mention made about Cuba.

The Caribbean Community was established by the Treaty of Chaguaramas on 4 July 1973 so this year the organisation is celebrating forty years of its existence. In 2001, a Revised Treaty was also signed which treaty greatly widened its scope. Presently, Caricom has fifteen full members covering over fifteen million people. There is no doubt that broadening Caricom as being contemplated will enhance it and will bring greater benefits to the region. The main purposes of the Caribbean Community are to promote economic integration and cooperation among its members, to ensure that the benefits of integration are equally shared, and coordinate foreign policy.

Already there are two non-English speaking members of Caricom: French-speaking Haiti and Dutch-speaking Suriname, so the presence of non-English speaking states has not been a problem. One wonders therefore as to why Cuba is not high on the agenda for membership of Caricom. Historically, the relationship of Cuba with other members of Caricom has been much closer than that of the Dominican Republic, yet it seems that that country is being given priority for membership of Caricom over Cuba.

One may well ask the question: Is it the cold war strain between the United States and Cuba that is causing a lack-lustre attitude by Caricom states towards Cuba? In 1960 the United States partially imposed a commercial, economic and financial embargo against the Castro government which embargo was strengthened to a near-total embargo in 1962. In 1993 it was codified into law in the US with the stated purpose of maintaining sanctions against Cuba as long as the government there continues to refuse to move toward “democratization and greater respect for human rights.”

The general nature of the embargo is that American companies and their subsidiaries in third countries are prohibited from trading with Cuba. Moreover ships carrying goods to and from Cuba are prohibited from entering the US ports. It is estimated that this embargo has cost the people of Cuba billions of dollars since its imposition. Many resolutions in the United Nations General Assembly have been passed by substantial majorities in favour of ending the embargo but to no avail. The latest resolution was on 13 November 2012 with 188 members (including Caricom states) voting in favour of ending the embargo, 3 were against, being the US, Israel and Palau and there were 2 abstentions.

After more than fifty years of this embargo against Cuba it seems that the time is right for due consideration to be given by the US to lifting it. Following the successful Cuban Revolution against the Baptista regime in 1959 there may have been human rights abuses as would be expected following a revolution. Cuba however has come a long way from the related upheavals of that revolution and, moreover, it has a right to determine its own form of governance. When one gives consideration to the plight of Guantanamo Bay detainees who are being held there by the US since 2002 without charge or trial it is most difficult for one to consider exonerating the US itself from engaging in human rights abuses.

Human rights abuses in any form must not be condoned, and every effort ought to be made to eradicate those abuses. However it is submitted that the time has come when the economic embargo against Cuba ought to be lifted by the US. Notwithstanding, the cold war strain between the US and Cuba ought not to be a hindrance for consideration to be given by Caricom states for Cuba to be given the option to join Caricom. It is submitted that Cuba’s presence in Caricom will greatly enhance the Community.

NOW Grenada is not responsible for the opinions, statements or media content presented by contributors. In case of abuse, click here to report.
Tags: barbadoscaricomcubademocracyembargojosephlawrencetrinidad
Next Post 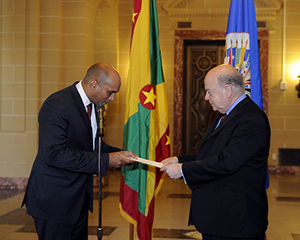 New Representative of Grenada to the OAS Presents Credentials