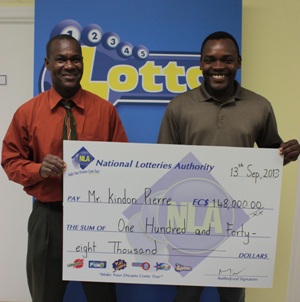 Nine days after, on Friday 13 September, the NLA General Manager, Mr. Geoffrey Gilbert presented the necessary particulars and the grand prize to an elated Officer Pierre — an avid supporter of the NLA games since he turned 18 years of age, eight years ago.

On the now-treasured evening of Wednesday, 4 September 2013, Mr. Alexis approached Gittens Pharmacy at Grand Anse with the intention of purchasing all his lottery tickets before the daily close–of–draws, but instead, he met the business doors closed. According to Mr. Pierre, after receiving his much-appreciated prize, he immediately scooted over to Mitchell’s Pharmacy which was still open. “It was almost time for draws to close, so I made sure and had them print my $6.00 worth of Lotto tickets first, just in case we ran out of time before I could finish make all my purchases.”

Mr. Pierre was at work the following day looking at the midday results at the Central Police Station when he received the exceptionally good news from a friend, who had obtained the results for the last evening’s Lotto draw on his behalf. “I was sure that I had four of the numbers drawn,” he beamed, “but when my friend texted me the results, and I realised that I had all — five, it was mas, oui! I shouted to everyone at work that I had won; went on my knees and said: ‘Thank you, Jesus’; then went outside in the yard and shouted in jubilation some more!”

When asked about his plans for the money by the NLA general manager, the surprisingly quite-composed Mr. Pierre expressed that he had no immediate plans, but would decide on how he would use it in 2014. “I will continue to live the same lifestyle as if I hadn’t won the jackpot,” said Mr. Pierre who also spoke with pride about his important role within his immediate family. “It’s a start in life, so I don’t want to rush and do anything drastic, but whatever I do in the future my family will also be part of it.”

In congratulating young police officer Pierre, the NLA General Manager also provided some financial advice to the newest Lotto jackpot winner. He said, “Use the money responsibly; invest in something worthwhile like a piece of land. Too often,” said Mr. Gilbert, “people are in possession of a lot of money; they spend it poorly, so there is nothing to show when the money is finished.”

Officer Pierre indicated that he has been winning in the Daily Pick 3 game also, which is his favourite lottery game. He has won as much as EC$3,000.00 in one draw.

NOW Grenada is not responsible for the opinions, statements or media content presented by contributors. In case of abuse, click here to report.
Tags: jackpotkindonlottomoneypierreprizewin
Next Post