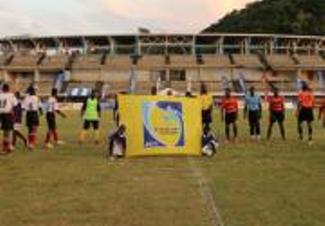 Ford Happy Hill has signalled their intent for championship honours in the Waggy T Super Knockout Football Tournament, with a big win last weekend at the Grenada National Stadium.

They were without a doubt the best team on show, after an impressive 5-1 victory over Real Old Men last week Friday. The Happy Hill outfit combined fluently stringing together several exciting build-ups, to literally outclass their opponents, after a fairly evenly contested first half.

Kwane Langdon opened the scoring in the 13th minute and Carlson McQueen doubled the score two minutes later. But striker Earnest Campbell headed in a terrific corner from Dwight McIntrye on the stroke of the interval in the 40th minute to make it 2–1 at the half. However, Real Old Men found the going pretty tough in the second period, as the more organized GFA Premier Division outfit gradually took full control.

Aneil Jones fired a rocket from the edge of the box on the right flank to make it 3–1 in the 42nd minute. Later goals by Carlson McQueen in the 56th and Cheddi Charles in the 63rd, completed the convincing performance.  In the earlier game Friday, Petro Caribe Queens Park Ladies whipped Happy Hill 6–1. Risa Garraway and Curleen Samuel scored twice along with strikes by Riana Charles and Alisa Thomas. Anick Sandy scored from the penalty spot for Happy Hill.

In the lone ladies game Saturday, St Patrick beat Hurricanes 1–0. After a fairly evenly contested first half, which was scoreless, the St Patrick’s team took the lead in the 46th minute through Canisha James. Meanwhile, Mark Bobcat Service Sun Setters and Seasons Fashion St David’s also got off to encouraging starts Sunday with victories. Sun Setters beat Crochu Estudiantes 3–1, with Kriston Julien striking a double, Kendon George scoring the other.

Seasons Fashion St David had to fight all the way for a 2–1 win over Christian Strikers with Neilon Morain and Michael St Louis the marksmen. The action continues this weekend with four games. Friday sees another women’s encounter when SGU Ladies tackle their counterparts from Happy Hill in the opening game from six o’clock. Game two is between Police and Ball Dogs. There is another double-header Saturday, when St John’s Sports meet the St Andrews Football League (SAFL) and St David’s United engage Young Guns.

NOW Grenada is not responsible for the opinions, statements or media content presented by contributors. In case of abuse, click here to report.
Tags: footballknockoutleaguesaggysoccersportstadiumtournament
Next Post

Convent St.George’s Wants The Title Back