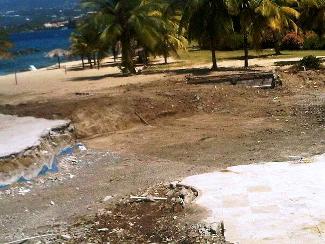 File photo of work on the LaSource Sandals hotel
Share

The construction and manufacturing sectors contributed significantly to the expansion of Grenada’s economy activity for the period April to June 2013 according to the latest quarterly report from the Eastern Caribbean Central Bank.

The economy is estimated to have expanded in the first six months of 2013 relative to the corresponding period of 2012. “The expansion was influenced mainly by developments in the construction and manufacturing sectors, with agriculture also contributing positively to economic growth,” said the report which explained that construction activity rebounded in the first half of 2013, recording positive growth for the first time since 2006.

Some of the bigger construction projects were large private commercial projects, namely the Sandals LaSource Resort renovation and expansion and the new National Insurance Scheme commercial complex. In addition, some works have resumed at the Bailles Bacolet Resort and Spa.

“The expansion in construction was also supported by growth in the public sector capital programme, as evidenced by the increased outlays for capital expenditure. Public sector construction activity was primarily limited to the maintenance and rehabilitation of roads, schools and other public buildings,” said the report.

The April to June report which provided reviews of all the Eastern Caribbean Currency Union members said that in Grenada, the increase in construction activity was corroborated in part by a 16.8% rise in the value of construction material imports.

“Construction activity was moderated by the pace of private sector residential construction projects, which is estimated to have slowed, based on a reduced rate of growth in commercial bank credit for home construction and renovation,” said the report which is available on the website of the ECCB.

When he presented the 2013 budget in April, Prime Minister Dr Keith Mitchell said that with the exception of the Agriculture and Education sectors, most major sectors in Grenada including Tourism and Construction have suffered significant decline. He said that the downturn in construction had played havoc on our people who are employed by and benefit from this sector.

He announced back then that in addition to the various public sector projects, Government will provide further stimulus to the construction sector by reducing the VAT on a number of construction items to 5% from 1 May 2013 to 31 December 2014.  These included sand, cement, roofing materials, steel, lumber, and construction blocks.

Government also foregoes VAT on construction services for projects valued at less than EC$400,000.00 over this same period. “Our commitment is to deliver a meaningful reduction in the cost of construction and to stimulate construction employment and economic activity,” he promised.

The report said that driven in part by increased domestic demand, production in the manufacturing sector is estimated to have increased in the first half of 2013 following a contraction in the corresponding period of 2012, with beverages leading the way.

Output of beer expanded 29.4% to 416,509 gallons, in contrast to a decline in 2012. Similarly, estimates for the production of rum, malt and stout indicate increases of 23.1%, 20.0% and 17.9% respectively. Higher levels of output were also recorded for soft drinks (2.4%). In other developments in the light manufacturing sector, paint increased by 6.6%, and poultry feed by 9.0 %, largely reflecting a rise in export demand. These increases were partially offset by declines in the production of flour (11.6%) and toilet paper 1.9%.

Agricultural production is estimated to have increase in the first half of 2013 compared with the outturn in the corresponding period of 2012, driven mainly by improved planting conditions and higher domestic demand. Among the traditional crops, banana production rose by 21.2% to 3,511 tonnes, while output of nutmeg grew by 30.1% (53 tonnes).

By contrast, the cocoa crop yield declined by 26.0% (165.0 tonnes), reflecting the cyclical nature of the crop output. Output of other crops (fruits and vegetables) contracted by 13.0%, attributed to low yielding harvests. Fish production increased by 26.9%, as more boats were put out to sea.

The report also pointed out that Consumer prices in Grenada rose by 0.2% on an end of period basis. The fiscal operations of central government are estimated to have resulted in a slightly larger deficit due to an increase in capital expenditure.

The report suggested that the pace of economic activity is projected to accelerate in the remainder of 2013.

NOW Grenada is not responsible for the opinions, statements or media content presented by contributors. In case of abuse, click here to report.
Tags: constructioneconomic growthgrenadalinda straker
Next Post