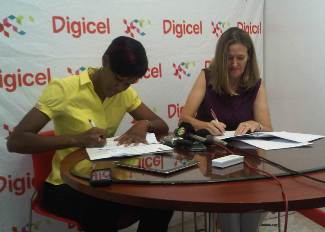 President of the Media Workers Association, Shere-Ann Noel, wants to see more radio entries and possible winners for the 2013 banquet and dinner which will be held on 8 December at the Grenada Trade Centre Annex.

Noel said that over the years there have been little or no entries in that category and it’s the executive’s hope that those who are involved in radio production will embrace the opportunity to submit work to be adjudicated in the various categories.

Once again, telecommunications provider Digicel will be the title sponsor of the event, by providing almost EC$18,000 to the professional organisation which is will moving away from the traditional awards and reception and instead adopting a banquet, awards and dinner format for 2013.

“It will be a celebrations opening with cocktail,” said Noel, as she spoke about the new procedure for the red carpet event which recognises the best submission of work that will be adjudicated by Mr Canute James of CARIMAC.

One of the challenges facing the organisation over the years is the failure of members to pay the annual subscription. Noel said that for 2013 only persons who have regularised their membership will be able to enjoy the benefits of participating in the celebrations. “We will therefore like to see as many members as possible pay their dues in time for the celebrations, because it will be to their benefit,” she said. The annual membership fee is EC$60 or EC$5 per month.

Country Manager for Digicel, Ms Patricia Maher, said that her company is proud to be associated with the event because the media is important to the society. “We see the importance of the media in Grenada and we are encouraging the recognition of the media’s hard work,” she said. This year a young media worker who has shown interest in his/her personal development will be awarded the Anthony Jericho Greenidge award.

Among the awards will be best sport, agriculture, tourism, entertainment, health, political and human interest story. The deadline for submitting entries will is 24 October. The boxes are located at Digicel’s outlet on Halifax Street and headquarters at Point Salines.

Two longstanding media workers will also be recognised for their contribution towards the growth and development of the media in Grenada over the years. 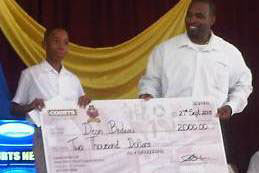