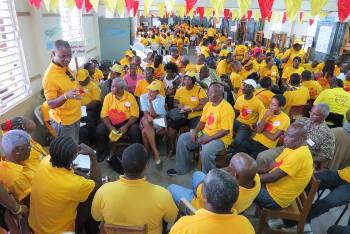 New NDC Executive to be Elected in 2014

New NDC Executive to be Elected in 2014

Seven months after losing the General Elections on 19 February 2013, delegates of the National Democratic Congress have decided to elect a new executive on 2 February 2014.

This convention will be almost 17 months after the party held its famous 30 September 2012 convention in which the main highlight was expelling ten significant members, which Political Leader Tillman Thomas has admitted contributed to the party being unable to win a seat in the 19 February General Elections.

That date was decided on Sunday, 13 October 2013, when it held its general council. Hundreds of party delegates met for internal discussions at the Hermitage Government School and to put what is described by the Leader Tillman Thomas as “the party strategy and work programme.”

“That general council is one of the better general councils we have had in a very long time… I have never had a more detailed financial report, we now know how much we have and how much we owe,” said Thomas. “We have to put structures in place to strengthen the party,” he adds.

The delegates also elected a five member disciplinary committee. General Secretary Bernard Isaac said that the purpose of that committee will be to “watch over the behaviour over the public behaviour of members.”  A chairman is yet to be decided but the members are Anthony Parke, Jerry Marryshow, Merle Byer, Elizabeth Forsythe and Davis John.

The General Council was followed by a rally which was addressed by a number of executive members including president of the Women’s Arm Jenny Rapier, deputy political leader Nazim Burke and political leader Tillman Thomas.

NOW Grenada is not responsible for the opinions, statements or media content presented by contributors. In case of abuse, click here to report.
Tags: conventionelectionlinda strakerndcopposition
Next Post