Prime Minister Dr. Keith Mitchell was warmly received on his first visit to the Organization of American States in Washington, DC since the February elections.

Dr. Mitchell used the opportunity to discuss two areas for which Grenada requires support: constitutional reform — including the establishment of an elections boundaries commission (a recommendation of the OAS Electoral Commission), and in the functioning of the Integrity Commission.

The Organization of American States is a critical player in maintaining stability and promoting development in the region, and continues to observe electoral processes across the Americas.

The Prime Minister and his delegation, which includes Ambassador to the United States, Dr. Angus Friday, and Permanent Secretary in the Ministry of Finance, Mr. Timothy Antoine, met with the OAS Secretary General early Friday, prior to the protocolary session of the Permanent Council, where Prime Minister Mitchell was the feature speaker addressing the representatives of the member states. 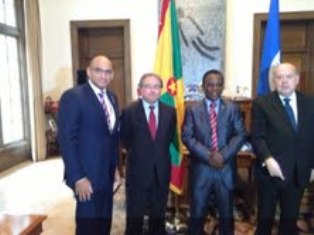