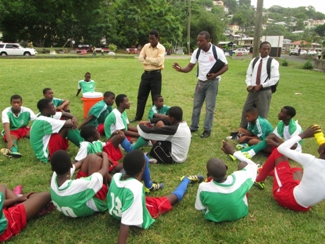 In what was expected to be a keen contest on Monday 7 October, ended in a drubbing as GBSS sent a clear signal that they are not just participating but competing for the Championship. They crushed arch-rivals Presentation Brothers College 7-0 at the Queens Park. GBSS is now with two (2) wins from as many matches. The other match played in Group B was between St. David’s Catholic Secondary and the Beacon High School. SDCSS won 4–1 at the Roy St. John’s Playing Field.

In Group A, Boca Secondary leads after demolishing Westmorland Secondary 22–0 at the Tempe Playing Field. It was Boca’s first match in the Tournament. Happy Hill cruised past Wesley College 4–1 at the Beausejour Playing Field.

In Group C,  St. Andrew’s Anglican Secondary School continues to lead, but were not in action yesterday. However, after suffering their first defeat to SAASS last week, McDonald College got an away victory 6-1 against the Grenville Secondary School.

In Group D, defending Champion St. Mark’s Secondary is now on six (6) points with an easy win 5–0 away to St. John’s Christian secondary in the lone fixture in that Group. The Republic Bank Right Start Youth Football Tournament which involves only Secondary Schools is in two categories — boys and girls.

The boys category consists of two divisions: U–16 and U–21. Each division has four groups, whereas in the girls category there is only one division consisting of two groups. The top two teams in each group will advance to the next stage of the competition.

NOW Grenada is not responsible for the opinions, statements or media content presented by contributors. In case of abuse, click here to report.
Tags: beaconbocafootballgbssjohnmarkpbcrightstartschoolsoccersporttournamentyouth
Next Post