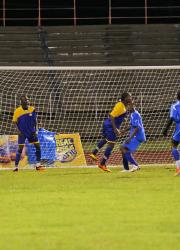 The round of 16 in the Waggy-T Super Knockout Football Tournament is set after almost a month of exciting football. The teams who were victorious in the preliminaries are now ready to edge closer and battle for the winner’s prize of EC$40,000.

They join defending champions Hard Rock, LIME Paradise, NEWIM GBSS and Hurricanes, who earned byes into the round of sixteen, which gets going Sunday, 3 November with a double-header. In the final preliminary matches last weekend, North Stars, Petro Caribe Queens Park Rangers, Boca Juniors and Futgoff ladies, scores victories to stay alive in the competition. Goals by Jelson Rush- a double and a strike by Somor Frazer, gave North Stars a 3–2 win. Five Stars led 2-0 at the interval with goals from Gregory Sylvester and Shandie Date.

In the other game last Saturday, Petro Caribe Queens Park Rangers also had to come from behind to beat Honved 3-1. Kerry Charles gave Honved the lead in the 35th minute with a well–taken free kick; but the River Road outfit found their touch in second period with goals by Brian Andrew, Irvin Smith and Patrick Modeste paving the way. Boca Juniors meanwhile, got the better of Fetter Boys 5-4 on penalty kicks, in what was the first penalty shoot of the tournament, a playing to a goalless draw during regulation time.

Meanwhile, Futgoff ladies beat Hurricanes 8–0 to reach the semi-finals of the ladies event. Akera Peters, Roneisha Frank and Merissa Charles scored two goals each with the others coming from Christa Stevens and Rockel Hood. Futgott ladies will meet St Patrick in the first ladies semi-finals on Saturday at the National Stadium. The first ever “Bag ah Money Bingo”, is also carded for Saturday, as Waggy-T continues to promote his style of Sports and entertainment — “Sportainment”, as its being branded.

The round of 16 kicks of Sunday, 3 November with a double header. The opening game from six o’clock in the evening features a match-up between LIME Paradise and Combine Northerners. Paradise earned a bye, while Combine Northerners beat Spice Basket Marvalites 3-2 in the Northeast St George Derby earlier on. Game two brings together Petro Caribe Queens Park Rangers, who defeated Honved 3-1 last week and Season’s Fashion FC, who stopped Christian Strikers 2-1. Keen matches are expected, as the teams seek to stay alive in the competition and remain in contention for the winner’s prize.