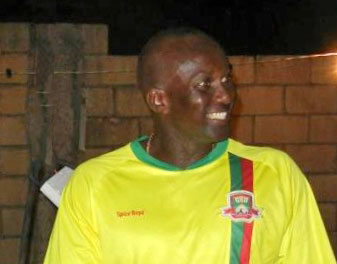 “The realization of a dream, with the chance to give back to the game that has given me so much”, is how Junior Murray has described the start of activities associated with the launch of his Cricket Academy.

The former Grenada, Windward Islands and West Indies wicketkeeper-batsman, Sports Ambassador and MBE awardee is spearheading a series of initiatives under the Junior Murray Brand, which includes the Cricket Academy. The Academy will serve young Grenadians between the ages of 5–15 and is geared toward the development of the game locally through the services and expertise of one of Grenada’s most celebrated heroes.

Since Saturday 23 November, introductory and registration sessions have begun at the Roy St John Playing Field and will continue every Saturday until the end of this school term.

The Academy resumes in the new school term and Teachers and Parents are encouraged to ensure the attendance of those young ones interested in learning the game or improving their skills.

Additionally, Junior Murray will be handing over cricket gear to the Clozier Development Committee in response to a request for assistance for the two cricket teams which represent the Village in competitions in St John and St Andrew. The hand-over will take place on Tuesday 17 December 2013 during the Village’s annual Christmas tree lighting festivities.

On Sunday 9 February 2014, the first annual Junior Murray/Made In Grenada Celebrity Cricket match will be played at the Progress Park in St Andrew. The inaugural match will form part of the festivities to celebrate Grenada’s 40th anniversary of Independence. The match will feature local personalities from the sporting and entertainment fraternities along with regional and international cricket friends of Junior Murray.

Grenada’s first-ever Test cricketer who recently played club cricket in New York and was featured, in October, in the Michael Holding Masters tournament in Jamaica, is embarking on a renewed agenda to capitalise on the Junior Murray Brand to aid in the development and promotion of the game of cricket in Grenada.

Made In Grenada is a strategic partner in this renewed drive, with responsibility for the overall management of the Junior Murray Brand and its associated activities.

NOW Grenada is not responsible for the opinions, statements or media content presented by contributors. In case of abuse, click here to report.
Tags: academyandrewchristmascloziercricketjuniormurray
Next Post

Tourism Awareness Week To End In A Big Way