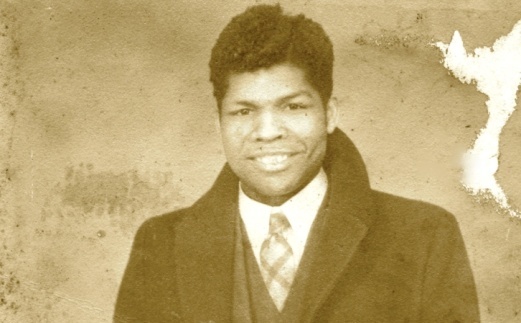 In 1941, the depths of the Second World War, 19-year old Darwin Samuel, my father, left the safe shores of Grenada on a troop ship, bound for Britain. He nearly never got there. In November 1941, a British troopship sailed into beautiful St. George’s Harbour in Grenada. As usual with any visiting British naval vessel, there was much pomp and ceremony, the Administrator of Grenada Charles Henry Vincent Talbot resplendent in his feathered hat and ceremonial sword (Grenada was too small to warrant a full Governor). The next day, thousands of leaflets were distributed all across Grenada, announcing the purpose of this troopship’s visit: men.

In the early days of the Second World War, coloured chaps from the colonies weren’t exactly welcomed into the British armed forces. War or no war, racial superiority had to be maintained. On the application form you had to answer the question: “Are you of pure European stock?” Later on, when all their pure European stock was being annihilated by the Nazis, the British turned a blind eye to that question — anyone would do. But even then, most black soldiers found themselves restricted to support roles like logistics, while white soldiers got on with the real business of fighting.

But Britain needed men — of any colour — to build the bombs and tanks needed to defeat Hitler. So Whitehall decided to tap its colonies for manpower. Young men from the colonies were offered inducements to go and work in the British armaments industry: free technical training, a guaranteed job, and the possibility of a scholarship after the war was won. Not a promise, a possibility, and in those dark days there was no certainty that Britain would win the War in any case. That was good enough for Darwin — it was a chance. He figured that if he put in enough service during the War, after it was all over he would be able to pursue his dream: law.

In the colonial Caribbean of the 1930s, law and medicine — the professions — were the only guaranteed means of advancement, if you happened to be born black. Business and commerce were the sole preserve of the brown middle class. Blacks had no place in business, other than to take orders and load trucks. The colonial civil service also offered opportunities, but again, all the senior positions were filled by British civil servants or local whites.

But the legal profession; now that was where a man of any colour could make a name for himself — and a living. With a law practice you weren’t beholden to anyone, you could put up your shingle anywhere and people would come. Lawyers are like undertakers: you may not like them but at one point or another we all need one.

Despite all Darwin’s arguments, his father, Nathan Dennis (“ND”) Samuel, wasn’t impressed. ND took the view was that if his son wasn’t good enough for the British Army, then why should he go and work in their factories and risk getting bombed? Because, reasoned Darwin, those factories are away from here. And besides, it was England; the home of culture and learning. ND gave up, knowing you can’t stop a young man when he’s made up his mind. Darwin signed up.

Regardless of the opportunities awaiting him in England, first of all Darwin had to get there. In 1941, nowhere was safe from the German U-boat menace; even in the faraway West Indies, the War in Europe was being waged on and under the placid Caribbean Sea, with deadly consequences. U-boats would routinely sink British merchant shipping carrying strategic cargoes from South America to Britain, sometimes within sight of the islands or even in their harbours. Even the wooden inter-island schooners were not safe; many West Indian sailors and passengers lost their lives. Our father used to tell us that late at night, all the way up in the hills of Perdmontemps, they would hear the U-boats re-charging their batteries as they surfaced in the deserted bays of Eastern Grenada. It was even rumoured that German sailors would occasionally come ashore, seeking the delights of fresh food and female company.

As the troopship sailed northwards and Grenada’s lush mountains slowly receded over the horizon, young Darwin could not have helped but feel butterflies – whether from seasickness, U-boats or otherwise. He was heading off into an uncertain future; to a foreign war-torn land; with no family or friends to greet him – at the tender age of nineteen. Those were different times; people grew up a lot quicker back then — you had to. Here was the one opportunity that presented itself, and our father grabbed it with both hands. He could not depend on his father for a livelihood; a young man was duty-bound to leave home and make his own way in the world — or die trying.

The ship left Grenada and sailed north-west, stopping at other islands and picking up like-minded young men at every port. All the passengers shared a common purpose and the mood of the boat heightened as it gathered momentum, island to island.  Until they reached Jamaica – then the trouble started! The Jamaicans immediately started complaining: they didn’t like the sleeping arrangements, why couldn’t they have the comfortable berths occupied by them small islanders? Blame geography, replied those same pissed-off small islanders. The reply of the ship’s officers was more succinct: sling your hook, below decks! Even after they sailed from Jamaica the Jamaicans were still causing trouble, and in any conflict they were quick to pull out their weapon of choice: an Okapi ratchet knife, otherwise known as a Saturday night special.

After Jamaica the ship headed for New York. The ship left the sheltered waters of the Caribbean and heading into the Atlantic Ocean – in winter. As the ship headed northwards the temperature steadily dropped, increasingly traumatizing the ship’s thin-blooded passengers. The mid-Atlantic in mid-winter is not the best place to have your first experience of cold weather. By the time the ship docked in a freezing cold New York, none of its passengers could be seen on deck to take in the breathtaking sights on display — except for one Darwin Samuel, huddled under dozens of blankets; he wasn’t going to miss out on this!

He wrote on the back of a postcard: “Sailing into New York Harbor, under the Verranzano Narrows bridge, past the Statue of Liberty, docking at the Hudson River Terminal in Manhattan’s West Side with the Empire State Building looming overhead: unforgettable!”

The ship stayed in New York just a few days, enough time for the Caribbean contingent, travelling in groups for safety, to taste the pleasures of the greatest city in the world, the city that never sleeps. He told us of going to the world famous Apollo Theater, home of the Harlem Renaissance of the 1930s, and not understanding a word of what the Harlem “hep cats” were saying to him!

Trouble started the day before the ship was due to sail for England. As the Jamaicans had found out, the luck of the draw had blessed the Grenadian contingent with the best berths on the ship; much more comfortable than the quarters assigned to late-comers. But unlike the Jamaicans, the late-comers in New York had status; they were British naval officers.

The officers took one look at the cabin occupied by Darwin and four other Grenadians and immediately claimed it for themselves. It was a comfortable cabin built onto the deck of the ship, with portholes on all four sides, plenty of ventilation and natural lighting. Dad and his Grenadian friends were told in no uncertain terms by the ship’s captain: sling your hook, below decks! If they wanted it officially: your berth has now, by order of His Majesty’s Navy, officially been commandeered — now sling your hook! Dad protested but of course to no avail; he and his Grenadian shipmates had to go below decks and seek out whatever rough berths they could find – behind the Jamaicans. But God has a funny way with revenge.

In the middle of the Atlantic the convoy ran into one of the feared mid-winter storms. As sixty-foot waves smashed down onto the ship, all souls on board were battened down and tied to their bunks, praying with all their might that with each roll of the ship under tons of cascading water, the old girl would slowly right herself and continue head first into the next monster wave. Plus of course the perennial wartime sailor’s prayer: that the next torpedo would hit another ship, not theirs!

The following morning our shell-shocked, sea-sick sailors gingerly emerged from below decks to survey the damage. They found to their horror that the storm had ripped away everything not firmly affixed to the ship — including our father’s ex-cabin and all its British occupants, none of whom were ever seen again.

The meek shall indeed, inherit the berth! 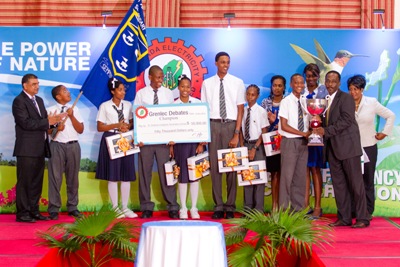