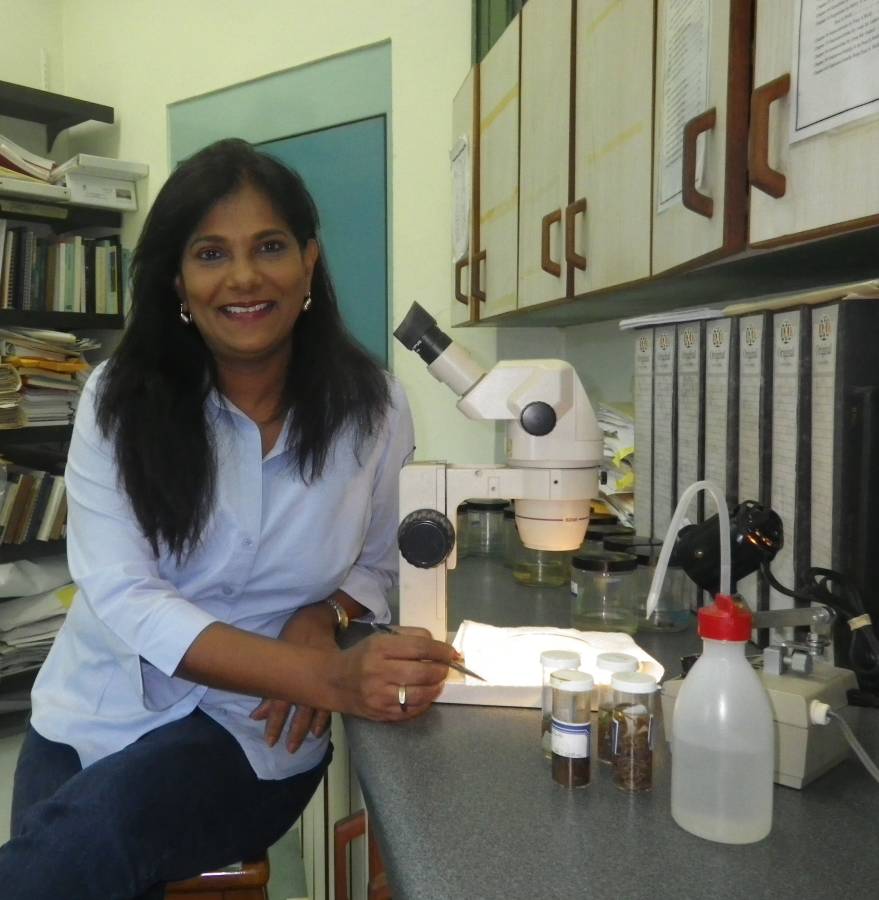 UWI Lecturer Dr Judith F. Gobin joins a team of international scientists on a 6-day, deep sea exploration of the Kick’em Jenny volcano and Trinidad Tar Seeps on board the Exploration Vessel (EV) Nautilus. Dr Gobin, who is a Lecturer of Marine Ecology/Coastal Ecosystems Management in the Department of Life Sciences at The UWI’s St. Augustine campus, was selected to join the mission on-board the exploration vessel from 10 to 15 November 2013.

The opportunity arose from Gobin’s participation in a Workshop on Telepresence-Enabled Exploration of the Caribbean Region in Miami in 2012.  The workshop was co-hosted by the Ocean Exploration Trust (OET), a non-profit organisation, comprising a team of experts dedicated to ocean exploration. The 60 Caribbean scientists in attendance were each asked to submit a proposal for possible inclusion in the OET’s EV Nautilus’s schedule. Dr Gobin submitted a proposal on ‘Natural oil seeps around Trinidad and Tobago’ which was accepted for inclusion in the 2014 exploration schedule. However, the OET team also invited her to join them as a Crew Scientist in the 2013 Kick’em Jenny & Trinidad Tar Seeps Expedition. She will be viewing live underwater scenes with the rest of the OET team and assisting with descriptions of the animals and the underwater environment.

The Exploration Vessel (E/V) Nautilus is a 64-meter research vessel operated by Dr Robert Ballard and his Ocean Exploration Trust team. Dr Ballard is internationally known for finding the wreck of the Titanic and the German military ship Bismarck. The ship carries with it two Remotely Operated Vehicles (ROVs) named Hercules and Argus which explore the seafloor and can be viewed in real-time online.

Dr Gobin, a Marine Biologist, has tremendous environmental and ecological experience in the marine and coastal areas of Trinidad and Tobago. She holds a Ph.D. in the field of Marine Biodiversity from the University of Exeter/Plymouth Marine Laboratory in the U.K. and an M.Phil. in the field of Marine Biology/Pollution Ecology from The UWI, St. Augustine Campus. She has published in a number of international scientific journals. Her expertise extends to environmental law and she is presently the environmental scientist appointed to the Environmental Commission (a Superior Court of record) of Trinidad and Tobago. She follows only two other Trinbagonians who have been on OET explorations but is the only Biologist so far and the first person from The UWI.

Her schedule includes ROV exploration and mapping of Kick’em Jenny volcano, known as the most active and dangerous submarine volcano in the Caribbean Sea. On the exploration samples of volcanic rocks and gases will be collected for geochemical analysis and there will be high resolution mapping of the crater floor in an attempt to define the nature of the active hydrothermal system. ROV explorations will also be extended into the Grenada basin in order to examine a large debris avalanche deposit that is likely associated with an ancestral Kick’em Jenny volcano.

The (EV) Nautilus will also explore the Gulf of Paria, east of Trinidad, where areas of the seafloor are suspected to contain natural petroleum and methane seeps.  The exploration team will conduct mapping and ROV exploration of areas with potential methane/petroleum seeps and mud volcanoes in search of diverse micro and macro biological communities. The ultimate goal of this exploration would be to provide critical data such as marine geological observations that will be useful in order to guide future coastal and marine management decisions for Trinidad and Tobago.

In response to being selected for this exploration, Dr Gobin says she’s very excited and looking forward to an even better appreciation of the Caribbean  marine environment, particularly the deeper seas and our own Caribbean volcano, the Kick’em Jenny. She aims to foster greater collaborations with international marine scientists and has been discussing the possibilities of education and outreach collaboration between the OET and UWI Seismic Centre. Ultimately though, she’s happy for the opportunity to fly The UWI and T&T flags.

Follow Dr Gobin and the crew of the (EV) Nautilus in-real time via www.nautiluslive.org and for more information on the Ocean Exploration Trust (OET), please visit: www.oceanexplorationtrust.com.