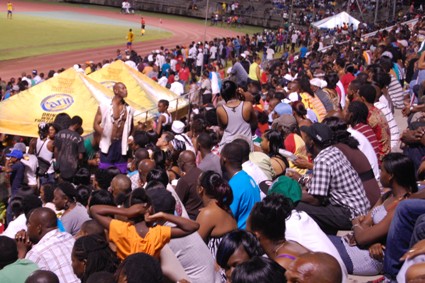 The Quarter-finals of the Waggy T Super Knockout Football Tournament are set, following the completion of the Round of 16 last weekend, with the top eight teams ready to venture deeper into the event, in a bid for the winners prize of EC$40,000.

Striker Ariel Jacob scored in the 78th minute of regulation time to force the penalty shoot out, after GBSS trailed for most the encounter.

In the other game Hard Rock beat Forde Happy Hill 2–1 with goals coming from the young and talented Shavon John Brown in the 47th and 77th minutes, after Henson Cuffie had given Happy Hill the lead in the 16th minute with a splendid free kick from 35 meters out.

Grenville Cooperative Credit Union (GCCU) Boca Juniors, meanwhile on Saturday advanced with a 2–1 victory over Glovers Spice Boys. Two goals within the space of a minute- the first by national striker Marcus Julien in the 45th and the other from Angelo Edwards in the 46 minutes gave Boca Juniors a 2-0 lead. Chaplin Paulin hit back for Glovers Spice Boys in the 48th minute, much to the delight of fans, who were thrilled to witness three goals in four minutes.

It took another exciting penalty shoot out to decide the other encounter as J Mark Construction Sun Setters got the better of a game Mt Ritch 6–4 on penalty kicks, after they had battled to a two all stalemate. Sun Setters matched the Grenada Football Association (GFA) First Division Champions play for play and are riding on a high after downing the champions. The action intensifies this weekend with quarter final matches Saturday and Sunday.

The stakes are higher as winning teams in the quarter-finals receive $1,500 dollars — EC$500 more than they attained for victories in the round of sixteen (16) and a chance to grab the championship prize of 40,000 dollars. This sets the stage for truly keen and exciting matches. NEWIM GBSS take on GCCU Boca Juniors in the opening Saturday evening from Six o’clock, while Diamond Concrete Hurricanes face Petro Caribe Queens Park Rangers in the later kick off.

Sunday see’s defending champions LIME Paradise squaring off against J Mark Construction Sun Setters in the opening game from six o’clock and Hard Rock against Ball Dogs. Large crowds have been a big feature of the tournament and thousands are expected to crowd the arena for the remaining matches, as the curtains fall on the tournament. The semi-finals are scheduled for the following weekend, with finals men and women fixed for November 30th at the National Stadium.