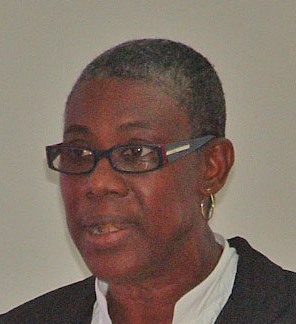 12 December 2013 is the date set by the Court to hear the “Application for Leave” filed by former Supervisor of Elections Judy Benoit as she prepares to ask the court for a judicial review over the manner in which Governor General Dame Cécile La Grenade dismissed her from the post.

The original date was 28 November but it was unable to be heard because the Judge had other matters dealing with on that date. “The application is seeking the Court’s leave to file Judicial Review proceedings against the Governor General. The rules of the Court require that one first has to seek the Court’s leave before a Judicial Review proceeding can be filed,” said Ruggles Ferguson, Legal Counsel for Benoit in the matter.

Former Governor General Sir Carlyle Glean appointed Benoit to the post in 2009 but she was dismissed by Dame Cécile in September 2013. According to the Constitution, the Parliamentary Elections Office is an independence office which falls under the jurisdiction of the Head of State and the Supervisor must be a public officer — Benoit was at the time and still continues to work as Health Promotions Officer in the Ministry of Health.

Benoit, according to the Court document is contending that her decision not to comply with a decision made by the Cabinet to integrate the regional EGRIP programme into the electoral computer system infringes on the mandate of the Office as established in the Grenada Constitution. She is also seeking damages from the state for wrongful dismissal.

In the Court document, Benoit said that she believes that her action in response to the directives from Cabinet were all justifiable in the circumstances and were designed to protect the integrity of the Office of the Supervisor of Elections and to uphold the letter and spirit of the constitution. “I was unjustifiably dismissed and I verily believe that the First Respondent acted unreasonably, irrationally, improperly procedurally and against the principles of natural justice.”

The “Application for Leave” hearing will be held at the number two High Court at 9:00 am.

NOW Grenada is not responsible for the opinions, statements or media content presented by contributors. In case of abuse, click here to report.
Tags: cecile la grenadeconstitutioncourtdismissalelectoralgovernor-generaljudy benoitlinda strakerparliamentsupervisor
Next Post