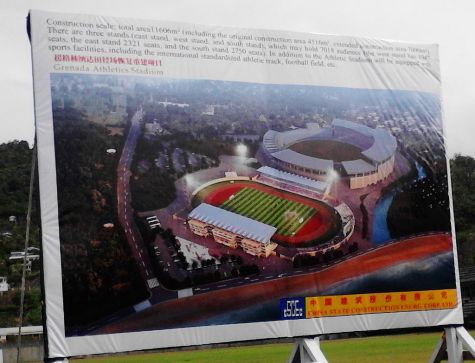 Pierre was speaking Tuesday at the ground breaking ceremony for the reconstruction of the stadium which was destroyed by Hurricane Ivan in 2004. The facility sits right next to the cricket stadium at Queen’s Park on the outskirts of the city. The cricket stadium which was also destroyed was earlier rebuilt for the time of the Cricket World Cup in 2007.

The People’s Republic of China is assisting the Grenada government in the 20-month refurbishment project estimated at about 25 million US dollars. It is being undertaken by the China State Construction Engineering Corporation.

“The breaking of ground for the refurbishment of the football and athletic stadium signals this government’s ongoing commitment to excellence in sports,” Minister Pierre said. “We believe there is a direct correlation between better sporting facilities and improvement in performances of our local athletes,” she added.

It is widely speculated that when completed, the facility will be renamed after Grenada’s Olympic 400 meter champion Kirani James. “We believe there are many diamonds in the rough, waiting to be discovered and polished,” Pierre said, in speaking about the importance of the facility in sport development.

“There are many sons and daughters, who given the opportunity, are ready to make this nation proud. This country that has given the world Kirani James and Shalrie Joseph (the MLS soccer star), indeed has more to offer,” she said. Pierre said that Grenada is looking forward to host such major events as the regional athletics championship CARIFTA when the project is finished.

Pierre said the government also hopes that world-class athletes will also use it as a training facility. “It is our vision that it will also be able to be used as a training facility for the best in the world — who can come to Grenada particularly in the northern winter periods to fine tune their skills and maintain their standards,” she said.

NOW Grenada is not responsible for the opinions, statements or media content presented by contributors. In case of abuse, click here to report.
Tags: athleticcariftachinaemmalin pierregrenadakiraniolympicsportstadiumtourism
Next Post