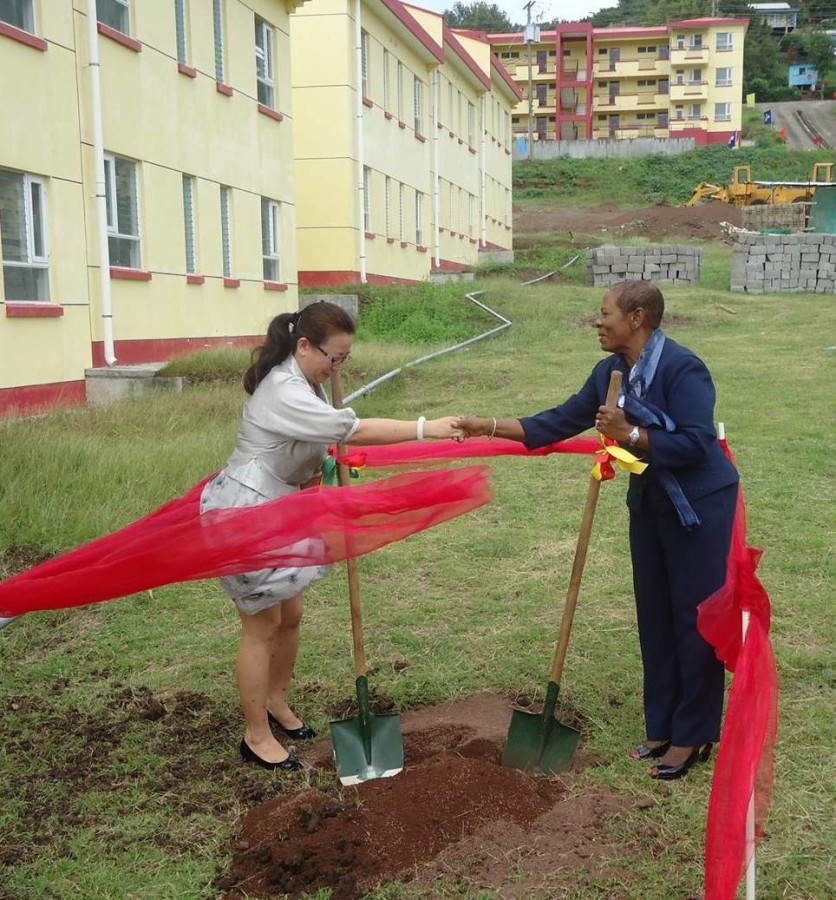 The official commencement of the outside supporting works of the first phase of the Low Income Housing Project was celebrated between the Governments of the People’s Republic of China and Grenada at a Sod Turning Ceremony at Mt. Gay, St. George on Wednesday.

The ceremony, which signalled the start of the additional work on the  houses, is a collaborative effort between both governments that will see the completion of over 300 units in the areas of Soubise in St. Andrew’s, and  Mt. Gay and Frequente in St. George.

The houses, which were officially handed over to the Government of Grenada on August 24, 2012 were incomplete, since the then administration was unable to provide the counterpart funding required to supply the units with electricity, water and sewage facilities. However, on the assumption of office, the Mitchell led administration, through the Ministry of Social Development and Housing made this a priority.

At the ceremony, Chairman of the Housing Authority of Grenada, Ashton Frame, said the Authority welcomed the generosity of the Government and people of the People’s Republic of China, since housing is currently an urgent and pressing need in Grenada. He thanked the Government of Grenada for the confidence placed in the Housing Authority to manage this important project and was in high praises of the Minister of Social Development and Housing, the Hon. Delma Thomas for the pivotal role that she had played in seeking China’s assistance to the complete the units.

In the absence of the Hon. Delma Thomas, who is currently out of State, the Acting Minister for Social Development and Housing, Senator, the Hon. Brenda Hood applauded the Government and people of the People’s Republic of China for their assistance. She also spoke of the initiatives that the Government of Grenada is undertaking to provide homes for Grenadian families.

“In recognizing the importance of housing to a Constituency and being a caring and committed Government, we have heard the cries of our people and this Administration has made a request for additional housing projects. Currently Government is finalizing the locations for these new housing projects,” Senator Hood said.

“Additionally, we have increased the allocation for housing repair to enable the Ministry to assist more vulnerable persons to improve their living conditions, which is a standing human right. Our Government is working diligently to ensure that Grenada has a proper housing stock for our families. The pride and joy that comes with ownership is a dream that every Grenadian should realise.”

The units will be brought to a full state of completion by the Beijing Construction Engineering Group (BCEG), whose Deputy Manager says they are expected to be completed in a little over six months.

Once finished, the Housing Authority of Grenada would be responsible for the distribution of the units.  The Authority is currently in the process of finalizing the eligibility criteria for the over 4,000 applicants who have already showed interest in the 351 housing units available.

Applicants who do not meet the criteria for the low income housing units, may qualify for the soon-to-be-launched middle income housing project. However, some of the persons who were not successful in obtaining houses in this first distribution phase will be placed on a waiting list to be considered when the additional units are constructed.

Ambassador to the People’s Republic of China, Her Excellency, Ou Boqian, indicated that it is hoped that these additional units will be constructed as soon as possible.

GIS
NOW Grenada is not responsible for the opinions, statements or media content presented by contributors. In case of abuse, click here to report.
Tags: chinaconstructionhousingincome
Next Post

22% Decline in Cruise Passengers Recorded for 2013