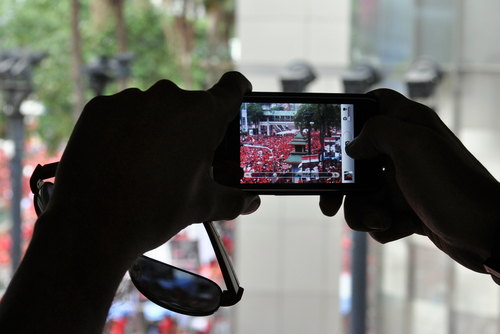 Citizen Journalism in the Wrong Hands

Citizen Journalism in the Wrong Hands

A few months ago I saw a quote which said that we are living in an era of “smart phones and stupid people,” this was so striking a message that I posted it as my Facebook status and quite a few of my friends “liked” it and shared it on their own timelines.

If anyone was to go back and check my Facebook timeline, that status will be there staring you in the face in the year 2020, because I am sure that Facebook will be there to remind each and every one of us how our life is reflected from the time we became a member of Facebook nation.

I opened with this to remind you that Facebook may tell anyone who clicks on your timeline so much about you, that what is posted there can actually determine people’s opinion of you, whether you know them or not, and whether you are alive or dead.

I cannot help but to follow the recent incident of the minor and the police officer which has so many becoming instantly emotional after watching a no more than 90 second video that was posted on Facebook.

This incident which I am sure is more than 90 seconds involving a young lady in school uniform and a policewoman in police uniform, is of bad taste to both the school and the police force. Arguing and pointing fingers will not undo what was done, and by the time the emotions are put aside and the truth is revealed, those very ones who are pointing fingers will suddenly see that three fingers are pointing back at them.

Journalists are trained to never reveal or use indicators that will identify a minor in any situation that is of negative impact immediately, or long term, and thus when trained journalists do stories involving a minor, the general public should not see a photo, name, school, parents, or other relatives’ names. We have to protect the minor!

Those who are into social media engaging in activities that can be called “citizen journalism” are not trained to be sensitive to anything, and they just go with the flow without thinking about legal or moral implications. People by nature like gossip and scandal, and will enjoy the immediately exposure, until it involves them or someone close.

Some may say that the person who shot that video and placed it on Facebook was engaging in citizen journalism — informing the public, because they have a right to know, and mainstream media will not tell the public. But I am wondering, what was the real intention? Was it to paint the police as one who abused her power? Or as someone who has no respect for children? Was it to show a young lady displaying rudeness to one in authority? Why did the video commence where it commenced and not from the actual start of the fiasco?

Should we as people really accept this as citizen journalism? As you read this, I wait for you to ponder for a while, and visualise that 14 year old child, five years from now. What impact will this video have on the minor? Ask yourself, will it cause any annoyance? Will it cause inconvenience? Will it deceive? Will it mislead?

The court can decide to forgive her and not hold the charges against her, but because of this so called act of citizen journalism — the video will continue to circle the world and opportunities can be lost.

We once had a law which said in part, “A person shall not knowingly or without lawful excuse or justification send by means of an electronic system or an electronic device electronic mail or an electronic message for the purpose of causing annoyance or inconvenience or to deceive or to mislead the addressee or recipient about the origin of such messages.”

But guess what? Neither the parents, the school, the state, nor anyone else, can take legal action to ensure that the electronic message which has gone viral, be stopped from circling the world.

You want to know what law was that — well that was Section 6, Subsection C of the Electronic Crimes Bill, that was thrown out the window, because some politically narrow minded persons decided to make noise about a piece of legislation that was yet to be even tested in the court. None had the belly to test in the legal system, but champion for its removal.

I am certain that the same bunch, who demanded the removal of Section 6 of the Electronic Crimes Bill, will be the same bunch who will now say, “Something must be done, for the sake of the child.”

Two wrongs don’t ever make a right, but we can all compromise. After all is said and done, do you really think that this video will affect the police officer, that youth, that minor? The young lady will have to constantly and continuously have to be giving excuses for that video.

That is the sad impact of “smart phones in the hands of stupid people.” If this was an attempt of citizen journalism, I hope that after the nine days of emotion, the person who posted it up will be very satisfied with him or herself about the contribution he or she has made to the future development of this child.

NOW Grenada is not responsible for the opinions, statements or media content presented by contributors. In case of abuse, click here to report.
Tags: citizencrimefacebookjournalismlinda strakermediaminorpolicesocialstudentwoman
Next Post