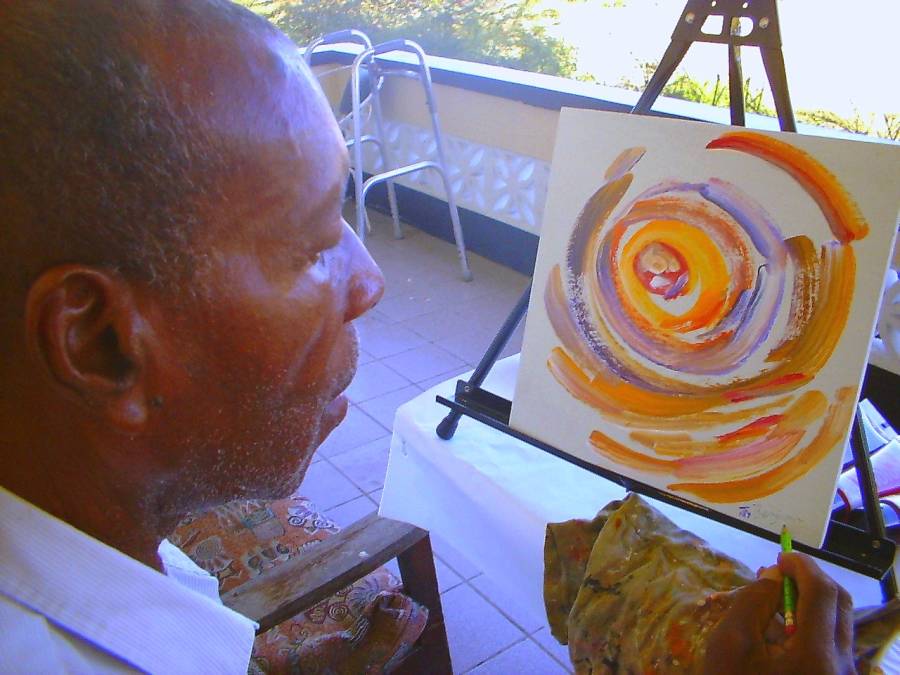 The Grenada Airports Authority (GAA), in partnership with the Grenada Arts Council (GAC) held a dedication ceremony at the Maurice Bishop International Airport (MBIA), the centrepiece of which was the newly installed, 8-feet high steel sculpture “Celebrating John Benjamin”, dedicated to the life of Grenadian artist, John Benjamin.

John Benjamin (1934–2010) was from St Andrew. He was the first Grenadian to be awarded a Commonwealth scholarship to study art, which he did at Brighton College of Arts in East Sussex, England. Benjamin returned to Grenada in 1962 and taught art in elementary and secondary schools. He also served as Supervisor of Art in the Ministry of Education.

He was a prolific artist who held many art exhibitions. His iconic paintings of “The Nutmeg Princess,” large panels depicting women in dresses made up of nutmeg, were well known to travellers who passed through Pearl’s Airport. He received many international accolades for his art in countries including England, Germany, France, Canada and Tokyo.

Benjamin was also a great writer of poetry and succeeded in winning a BBC Prize in its First Caribbean Poetry Contest in 1980. In 1991 he wrote the book Short History of Grenada: New Dimensions. In 1986 his painting “Dance for Mamma and Grandpa” was selected by the United Nations International Children’s Emergency Fund (UNICEF) to be reproduced on millions of stamps that were sold to raise funds to support children around the world. In 1992 Benjamin received an MBE (Member of the British Empire) for his contribution to the development of the visual arts in Grenada.

Dr Oliver Benoit, of the GAC was instrumental in planning the partnership. He commented, “Such display of artworks not only enhances the aesthetics of the airport, but will also introduce visitors to Grenada’s culture, and provide a sense of pride to its citizens.” The partnership objective is to highlight the talented local Grenadian artists at one of Grenada’s most traveled entry points. The MBIA is the ideal place to start showcasing Grenada’s heritage through visual art.

The sculpture was commissioned by the GAC, designed and made by Maria McClafferty. It is the first of monuments to highlight prominent Grenadian artists. Benjamin’s 1976 painting “The Dancers” provided the inspiration for McClafferty’s sculpture, which was welded by Nigel Moore. The plinth and installation provided by Quinn Co.

Future plans at MBIA, include an art gallery at the soon to be reopened second floor Airport Waving Gallery. The art gallery will be opened to the general public and all airport users. There will also be displays of art murals at selected locations throughout the airport terminal building. The paintings and exhibits for the art gallery will be provided and managed by the GAC.

A Culture Of Social Justice