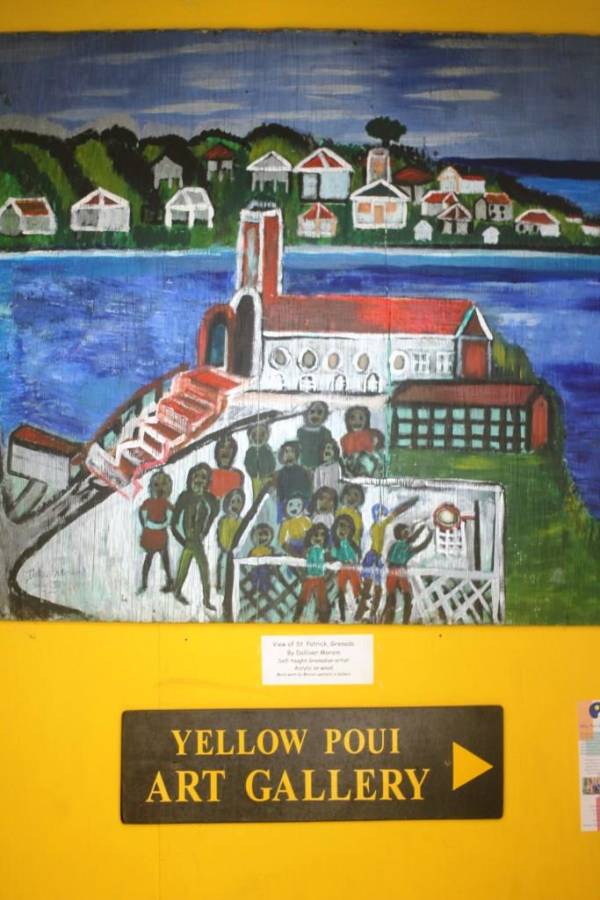 I remember the first time I met Jim. In my purple and green hair days, I was a young dreamer-of-being-an-artist. After working up the gumption, one day I called to ask if I could visit his gallery. A soft voice on the other end of the line, told me to look for the painted wall on Cross Street, and follow that along, up the steps and ring the bell.

Jim greeted me then, the same way he greets me now when I drop in for a visit – well perhaps with a bit more gusto, since we’ve known each other for donkey’s years. I had brought some samples of my work to him and he was kind. Kind enough to say go work on them some more, and bring them back. Years later, I’d brought them back, and he did take them, and many sold!

The art on the walls and the floor and just about everywhere in that small Cross Street space was not what I had learned in school to be called art. We good convent girls were raised on colouring inside the lines, and attempting with certain failure, to recreate European masters from lumpy tempera on grey sugar paper.

At the time I went to see Jim, I was trying too hard to become an artist instead of letting the art flow. Perhaps if I had paid attention at the time, I would have realised the opportunity to study with Jim and benefit from his years in MOMA and his eye for what was saleable. I would have been much farther along in my career.

Two weeks ago, Haitian artist Jean Renel Pierre Louis (Prensnelo) and I dropped in to have a chat with Jim. Surmounting the staircase, I breathed deeply, (because either the steps have gotten steeper or me slower), of the smell peculiar to old documents and archives, the smell of history. In this case, art.

In the absence of an art museum or archive, right now, Jim holds the information about Grenada’s art and artists, about how far we’ve come, and in what direction(s) our art may or may not be heading. Jim believes that art is not ‘something for people with no grades, or people with money to waste’ to do. He is a firm believer in art magnifiying the soul, of the artist and of the country they represent. “For about three years I used to install small exhibitions of a particular artist’s work at Barclays Bank (now CIBC First Caribbean), till they changed the interior and blocked the wall space. I used to write articles about what was shown which were printed in The Grenadian Voice,” said Jim.

So how did Jim end up in Grenada? Short answer, snow.

The family business in New York was signmaking and neon lights. He would draw the outlines and his father would bend the tubes. His father saw his interest in drawing, and registered his son at Pratt Institute. After a series of art and photography courses, Jim’s art career was distracted by a stint in the US Navy – damage control he says – but returned to the art world on the GI Bill, studying art history. Art was always there. After his art history course, he was determined to work at MoMA, the Museum of Modern Art. So one Friday he applied for a job, any job, and on Monday was at work. He stayed there for 4 years until the cold of the New York winters drove him to find somewhere warmer to live. “It was a toss-up between Greece and Grenada,” he said. “Grenada won.” He and wife Cornelia read about Grenada and decided to try it, for a new perspective, a new space to breathe, to be warm.

In 1966 they came to Grenada. Two years later, the first commercial art gallery in Grenada, the Yellow Poui was born, in the Purcell building on Granby Street, across from the market in Saint George’s. The first artist in his newly established gallery was Elinus Cato. (The first time I saw Cato’s work was in the lobby of the lower Church street premises of Co-op Bank. Trying to identify all the images Cato packed on his canvas, helped me pass the time standing in the sluggish line.)

Cato was the first artist on Jim’s books, then Gordon Hamilton. In those days the public interest was thin, but the artists were happy to have someone take an interest in their works. Jim also displayed work from Carriacou’s pride, Canute Caliste, as well. He connected with Canute on the recommendation of a religious worker at Madonna House in Carriacou in the early 70s. Jim began showing his work and his childlike approach to painting and his misspellings, immediately caught on.

“Canute used to divide his canvas or board in two, paint the sky with a few clouds and the occasional bird, but all his action was below the line, below the horizon. I encouraged him to put in a palm tree, or something to connect the bottom to the top.” With the inclusion of his unique narratives artwork titles, Canute’s work was well received by the purchasing public, mainly cruise ship visitors and hotel guests.

“The most successful to my mind were Cato and Caliste. They were unique and humorous. They told stories.” Of Cato, Jim said, “He was a marvelous artist. Cato just painted and painted, and his work began to catch on with tourists and word spread, and his work sold. Then came Gordon Hamilton and Betty Traynor, and after that, other artists started coming.” Jim’s gallery became the beacon for local artists’ works to be seen, and more importantly, to be purchased.

The gallery moved from Granby to Bruce Street, next door to Charles of Grenada, then to an upstairs on Cross Street, the current location of a radio station. That location was Jim’s absolute best in terms of walk-up customers, visibility and sales. He painted a mural of brilliant colours on the wall leading from the street, to encourage passersby to come up to have a look. A move to Richmond Hill did not auger well. His final destination, the Young Street location, is across from the Antilles Building, housing the National Museum and Tikal, and down the sidewalk from MNIB, aka marketing board.

Several times I have enjoyed watching art videos with Jim. He has scores of videos for public use and education. This is an excellent resource for visual art students, because after the movie, there is Q and A, with the distinct possibility that Jim will be able to answer almost any question a student may have pertaining to art.

Jim represents about 35 Grenadian artists, including Jackie Miller, Doliver Morain, Joseph Browne, Oliver Benoit, and long-time residents Chris Mast, Trish Bethany, and Marie Messenger. Is there a distinct Grenadian style? Jim said, “The Grenadian art ‘style’ develops I think from the artists’ desire to show Grenada in various ways, mostly landscape and flora, but also Grenadians at work and at play, as in regattas. Exceptions are Oliver Benoit and the long-time residents.”

Jim’s contribution to Grenada art has not been fully told, and he has no plans to write any time soon. He represents/has represented close to 45 artists from Europe, the UK and the US, plus Trinidad titans Boscoe Holder, Jackie Hinkson, Sundiata, MP Alladin and Pat Chu Foon, (he is godfather to Pat’s son). He encouraged a few to come to Grenada to paint, and in 1986, Hinkson had a solo show of drawings and watercolours, ‘All Works of Grenada’ at the Yellow Poui.

Forty-five years and several relocations later, Jim is still on the job, displaying artists’ works, and making himself available as an art resource for artists, teachers, students and persons interested in Grenadian art. Poui, in its present and possible last, reincarnation, is a 2-room gallery, at the top of 2 flights of steps, of a building original to the early days of Young Street. The short covered walkway from the street to the steps was once the entrance for horses, in the days when they were a regular sight in the town. Jim has taken the work of obscure Grenadian painters and shown them alongside Caribbean greats in his gallery, the Yellow Poui. The significance is not lost on me.

Jim Rudin. US Navy Veteran. Artist. Photographer. Gallery owner. Art encyclopedia. The possibility of life without Jim and Poui… I have no words.