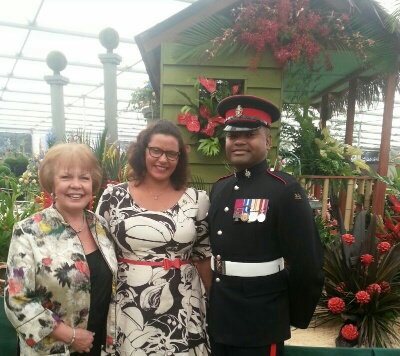 The full citation was published in a supplement to the London Gazette of 18 March 2005 and commented, “Private Beharry carried out two individual acts of great heroism by which he saved the lives of his comrades. Both were in direct face of the enemy, under intense fire, at great personal risk to himself (one leading to him sustaining very serious injuries). … Beharry displayed repeated extreme gallantry and unquestioned valour, despite intense direct attacks, personal injury and damage to his vehicle in the face of relentless enemy action.”

A new cultivar of Heliconia named the Johnson Beharry VC was presented at the Grenada booth, in his honour, at the 2006 prestigious RHS Chelsea Flower Show. The new plant was cultivated on Balthazar Estate in St Andrew, by Chelsea team member Dennis Noel. Artist Emma Wesley was commissioned by London’s National Portrait Gallery (NPG), to do a portrait of Beharry in full military dress in 2006. Beharry has also been featured on Grenadian, British and Commonwealth stamps.

This past March, Beharry holidayed in Grenada for the first time in 2 1/2 years, and said that he and his new family were thrilled to be here. His recently launched Johnson Beharry VC (JBVC) Foundation in the UK, leads youngsters away from a life of drugs and crime, and rehabilitates and prepares them for the world of work. Beharry said that his plan is to start a similar foundation in Grenada.