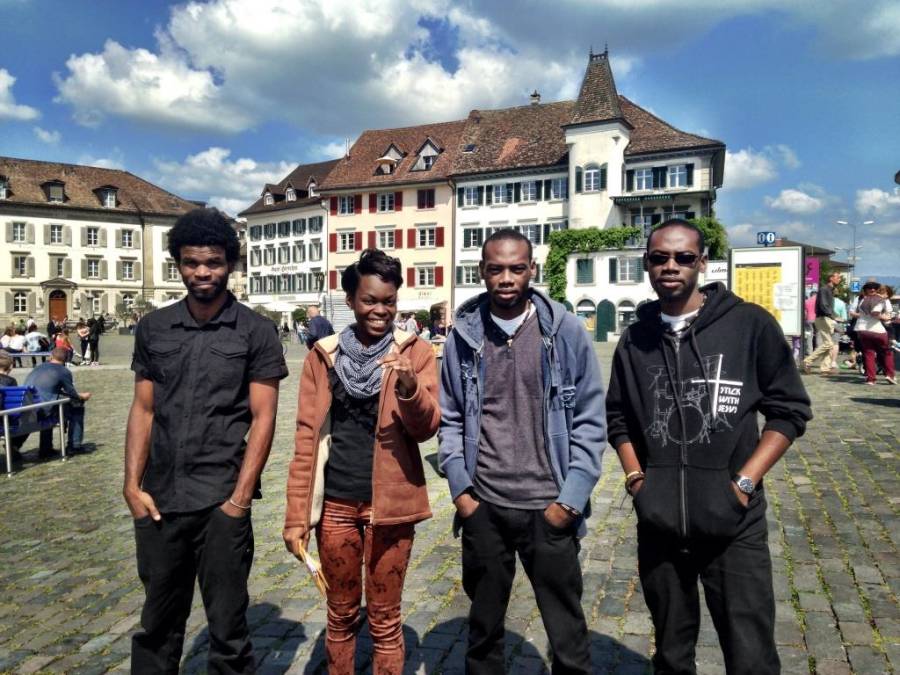 Grenada’s hottest new band, Sabrina & the navigators, have just returned from a 2 week whirlwind tour in Switzerland – 7 official concerts with numerous impromptu performances in various locations across the country.

This was the first time travelling across the Atlantic for band members Sabrina Francis (vocals), Jeremy Hector (guitar), Kavel Isaac (bass), and Josh Hector (drums), and they were thrilled to promote the ‘Isle of Spice’ while performing in an international music setting alongside other world-class artists. Leader and pianist, Dieter Burkhalter, originally from Switzerland, is co-owner of Le Phare Bleu Marina & Boutique Hotel.

Despite a busy rehearsal and performance schedule, the band members did take a bit of time for sightseeing. They were very impressed with the friendliness of the Swiss people, and also with the local scenery and even the cooler weather. “Switzerland is like a storybook,” commented lead singer Sabrina Francis, “the whole experience has been very fairytale like!”

Those who attended the band’s concerts were equally impressed with Sabrina & the navigators, and warmly welcomed the lovely Grenadian spirit which they brought to Switzerland. “They’re a fantastic band with lots of fantastic original songs,” commented Pink Pedrazzi, a Swiss singer, songwriter and guitarist, who has performed in Grenada numerous times. Singer, Freda Goodlett said, “They’re going to take Switzerland by storm!”

Sabrina & the navigators also introduced Grenada Chocolate Company’s award-winning organic chocolate to Switzerland, a country with a long history of top quality chocolate production. Interestingly, all transportation costs for the band while on tour were financed by the sale of Grenada Chocolate, the band’s promotional music USB sticks, and concert tickets. All accommodation and food while in Switzerland was sponsored.

After returning to Grenada, the band’s first performance was a special “Welcome Back Concert” at Le Phare Bleu Marina & Boutique Hotel on Saturday 14 June. In addition to an outstanding packed-house performance, the band showed a brief movie which they made about their Swiss tour, giving the audience a wonderful chance to share their tour experience.

Although this band is still relatively new in Grenada, songwriter Sabrina Francis, the band’s lead singer, recently gained much public attention when her song “This Is Home” was featured in the ‘Pure Grenada’ video launch for the Grenada Tourism Authority. For more information, contact [email protected] or follow the band on Facebook https://www.facebook.com/sabrinaandthenavigators.

NOW Grenada is not responsible for the opinions, statements or media content presented by contributors. In case of abuse, click here to report.
Tags: chocolatenavigatorssabrinastormswitzerland
Next Post