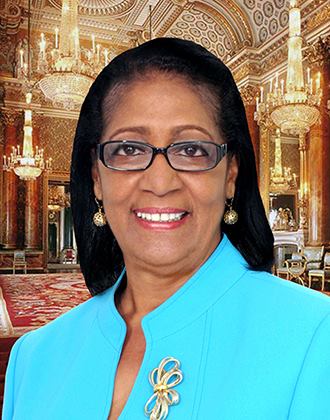 In her address, Dame Cecile said, “I am quite pleased to learn that women’s football has been incorporated as a formal sport here in Grenada, and I look forward to its development. Sport must always be geared to the promotion of opportunities and the maximisation of potential for all, regardless of race, creed or gender.”

Following the opening ceremony, the women from the south kicked off the season on a good footing, defeating their counterparts from the north 2-nil in the first of two open headers. (Women’s teams names not provided by GFA.)

In the second game, the 2013 Premiere League Champion Clarks Court Hard Rock was defeated by two goals scored by Rickson Phillip and Myrone McIntyre of the Mt Rich Football Club.

On Sunday, six of the Premiere League teams had an opportunity to kick of the season, some as winners and others having to settle for the defeated position. At Queens Park, GBSS got the better of the home team Queens Park Rangers 4-2. The boys from Sunset City defeated St John’s Sports 3-2, at the Alston George Park in Victoria, as Hurricane players Cassim Langaigne, Moron Phillip and Rohan George began what they hope will be the start of a successful season for the team. Chad Phillip and Corey McPhail scored for St John’s Sports.

In the final of the three games, LIME Paradise defeated Happy Hill 2-1 at the Beausejour Playing Field. The match scheduled between Five Stars and Fontenoy United, was postponed and will be rescheduled at a time to be announced.

Declaring the 2014 season open, the Governor General spoke to the future of the GFA. “The Grenada Football Association, which is celebrating 90 years of existence this year, has nurtured hundreds of our young people over the years by instilling in them these same qualities. In so doing, the GFA has played a pivotal role in the shaping of our society and the molding of our youth, the future of our country. For this to be a reality in the sport of football, GFA will need sponsorship from, and partnership with corporate bodies. Let this be a major thrust of this 90-year old organisation, to solicit solid, unwavering corporate sponsorships. GFA you are entrusted with the authority to go out and take the sport to the next level.”