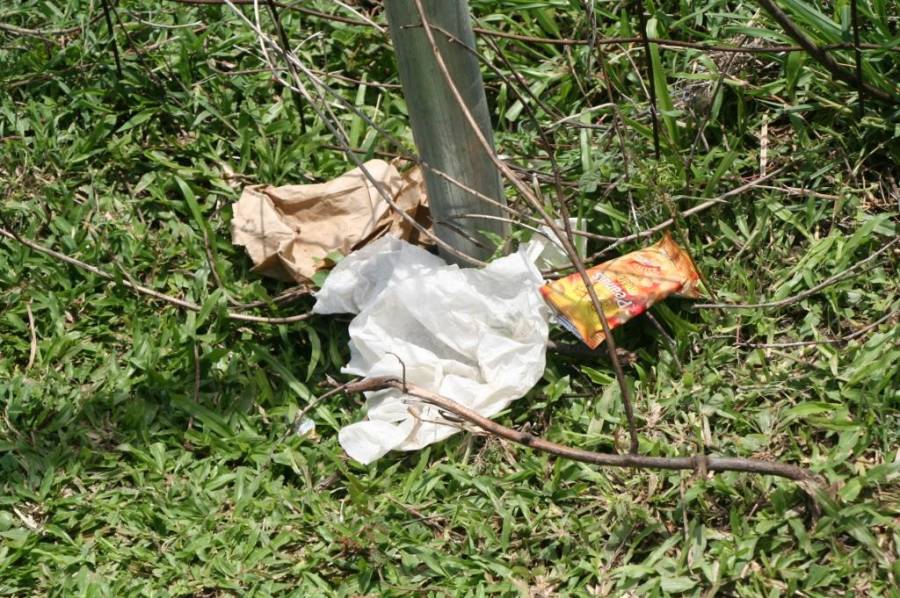 On Saturday 5 July, at 8 am, the G3’s – Grenada Green Group’s – intrepid secretary joined a group of some 45 workers from the River Antoine Estate, Belmont Estate and the River Sallee and La Poterie communities, to clear the new ‘Adventure River Antoine’ trail that will go around part of Lake Antoine.

G3’s interest in this was, of course, litter. By the end of the trail clearance, some 15 bags had been picked up. The estate workers were there to clean drains, chop down overhanging trees, cutlass grass. Not to pick out the plastic bottles, glass bottles, drinks cans, vehicle oil containers, items of clothing, great tangled heaps of irrigation tubing – kinked, ruptured, and, most worryingly, chewed by animals. (How much plastic do you want your cow or sheep to nibble?) String, condoms, tin foil, plastic sheeting, corroded water valves, styrofoam food containers…

Worryingly, one young worker said that litter created paid employment for people (and was therefore a good thing?). I asked him whether we ought then to scatter all our household garbage onto the street, in order to create as much work as possible, and who would pay for its removal from the street?

No answer. I asked him to name someone who earned his living from picking up litter (rather than de-bushing, or drain cleaning, or landscape gardening.) Again, no answer.

For the record, Solid Waste has categorically told us that not one worker would lose his/her job if littering stopped tomorrow. Littering distracts the workers from what they are paid to do!

On the way back south, I drove through Pearls Airport. This really gave the lie to the ‘people are paid’ notion. On 23 June, I had driven parallel to the old runway with tourists. I was ashamed at the heaps, mounds and sheer areas of litter that one man – presumably paid? – was trying to sweep up, following the drag racing. At least, I thought, next time I drive through, it will be clean. Maybe the next batch of tourists will not leave with the impression that Grenada is, and by extension, Grenadians are, filthy. Is this how Lewis Hamilton wants the track he has raced to be treated?

No such luck. On 5 July, the usual mixture (as above, at Lake Antoine) had been blown by the wind into the fence, and continued to cover – or smother – the area grazed by cattle and sheep. Seriously: how much plastic do you want in your meat? How many inches deep do you want the litter to be before you think that enough is enough? Is anyone going to be paid to pick it up? Then stop dropping it! And tell other people to stop dropping it. It’s quite easy.