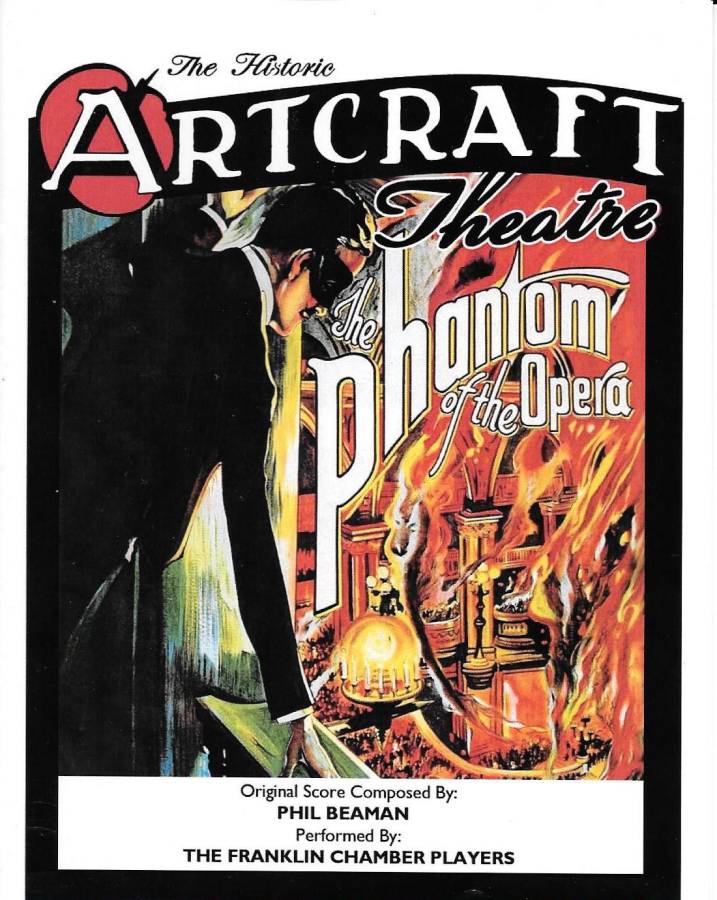 Over the past two months, well known composer and ‘local musician’ Phil Beaman, has been in the United States preparing for the world premiere performance of his new orchestral score and soundtrack for the original 1925 silent movie version of Le Fantome de l’Opera (Phantom of the Opera).

The new arrangement was debuted on Saturday 6 September 2014 at the Historic Artcraft Theatre in Indiana. Rave reviews continue to roll in from Phil Beaman’s excellent, world class production. The theatre which was built in 1922, specialises in showing classic films and live shows from the 1920’s era. A recent survey rated the Historic Artcraft as the number one theatre in the State of Indiana.

Le Fantome de l’Opera was originally a novel published in 1910 by Gaston Laroux, inspired by actual events and lore at the Paris Opera House. In 1925 it was made into a silent film and has been remade into numerous films since then.

Early silent films were always accompanied by live music during the movie, and were originally designed to cover up the distracting clacking noise of the reel-to-reel projector. Wealthy impresarios often hired an entire orchestra and commissioned complete music scores for theatre productions. The original score for the 1925 premiere of Phantom of the Opera had been long lost. However, the many positive reviews of the Beaman production provide an invaluable musical insight into the importance of this genre for films of the silent era.

To achieve his outstanding production, Maestro Beaman assembled a first-rate, professional, 23- member orchestra, comprised mostly of experienced members of the Indianapolis Philharmonic Orchestra. This formidable group of artistes included PhD performers, published composers, and other orchestra conductors. Formally, they called themselves the Franklin Chamber Players, but are more popularly known as the Phil Beaman Orchestra.

Beaman described his experience and the composition process for this film. “This was a wonderful and thrilling experience for me. I wrote the new score based on my research into the movie, reviews, the opera within the opera, and the original book, which reimagines that original score. Coordinating music to the different intricate elements that make up the film was the most challenging aspect, such as writing in the minor key in order to keep the right tone, or using the full orchestra to emphasise the depth and complexity of the love between the lead actress and the Phantom, and even the unconventional decision to use a professional screamer.”

Over the past few months, Phil Beaman, along with local sponsor Netherlands Insurance, have been working towards the creation and implementation of a Model School Music Programme in Grenada.

Richard Strachan, Managing Director of Netherlands Insurance and key sponsor of the Model School Music Programme commended Beaman for his outstanding achievement and his contributions to building music in Grenada.

“I applaud Beaman’s talent and the successes he has achieved in the music and entertainment industry, but even more so his unyielding efforts to initiate music programmes in our nation’s schools. The programme seeks to raise the profile of the music fundamentals being offered to our students, placing them in a much improved position to sit the CSEC music exams. I anticipate great results from this partnership,” said Strachan.

Maestro Beaman has already been booked to conduct the orchestra in two more performances, in September 2015 and September 2016. He also received several accolades for his outstanding production and was commissioned to begin work on another new orchestral movie score. It took Beaman 11 months to write this latest work, but this new famous movie score was 100% composed on Grenadian soil.

NOW Grenada is not responsible for the opinions, statements or media content presented by contributors. In case of abuse, click here to report.
Tags: co-operativesnetherlandsoperaorchestraphil beaman
Next Post