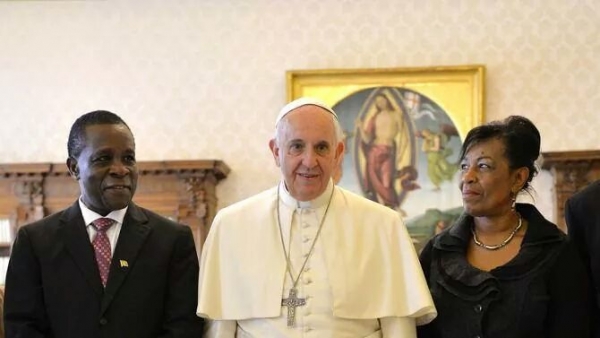 PM Mitchell And Family At The Vatican

PM Mitchell And Family At The Vatican

In the hour and a half-long meeting, Mitchell had the opportunity to engage both Pope Benedict and the Cardinal Secretary of State of the Vatican on a range of issues, from the state of the Catholic Church the world over and in Grenada, to the ongoing religious wars waged all over the world, particularly in the Middle East.

Mitchell reported that the overall theme of the meeting was the need for church reform to confront modern day problems, however controversial. The leaders agreed that the church needs to be a driving force in providing solutions, not further divisions, to the challenges around the world.

For his part, Pope Francis stated that it was this need for the church to be a voice in offering solutions to the world’s problems that prompted his meeting with the leadership of the church a few weeks ago. The Pope stated that his goal in convening the meeting was to provide a forum to enable the leaders of the church to speak out boldly on major issues—even as controversial as homosexuality and divorce.

Mitchell described the private meeting with His Holiness as “the most engaging, stimulating and refreshing” visit he has had with any of the leaders of the Catholic Church during his tenure as Prime Minister. “Pope Francis exhibits such a spirit of humility that it makes for easy and candid conversation.” Prime Minister Mitchell also met with Pope John Paul and Pope Benedict during their tenure.

When asked about the state of the church in Grenada, Mitchell stated that like in the rest of the world, there is a need for local church reform so as to enable the church to reach and retain more young people.

Upon Mitchell’s invitation, His Holiness expressed his willingness to visit the region, and Grenada, when convenient, and to continue to work with leaders to find solutions to global problems.

NOW Grenada is not responsible for the opinions, statements or media content presented by contributors. In case of abuse, click here to report.
Tags: catholicchurchpopevatican
Next Post