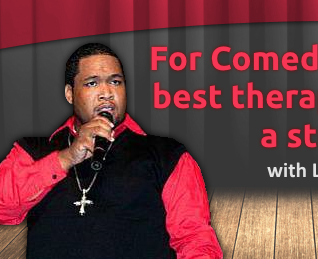 Fatman George, No Keeping Him Down

Fatman George, No Keeping Him Down

My name is Kim Jean. I’m writing from Chicago, Illinois. I had the great honour of talking with Grenada’s very own Lindon “Fatman” George on my podcast – inpractopia – and came out feeling privileged to hear his words. I wanted to talk with a Caribbean comedian and found a gem in Fatman. I knocked out a guest from a country I had not had on my show, plus someone to talk comedy with. After several weeks of Facebook invitations with details of the show’s objectives (to share the goodness of the entire Caribbean through its people doing what they love and making a difference) and myself, we finally sat down for our Skype chat. That was the best Thursday I’d had in a long time. It was the turning point of the three months since the podcast has been on the scene. Fatman’s story – his life so far and what he is overcoming – his message and ambitions reiterated what I believe our people are in abundance. A group that can learn from each other.

We went through the formalities, adjusted our cameras, and made sure recording was in order and went through cordial greetings. Then we were off. The story of him being nudged unwillingly on stage and then winning the ‘whole enchilada’ was music to my ears. The fire in his belly just grew from then. The show hosting and competitions started coming. A name to a face that made people laugh, icing on the cake.

Fatman is very proud of what he has accomplished, how he has grown, fine-tuned his comedy, learned from his mentors. Just before Christmas 2013, when he was scheduled to perform, he lost his bearings and fell down. An action that he admitted shocked him. The doctor later confirmed that he was sure to have a stroke if he took the stage. What followed was days of being hospitalized and months of rehabilitation in Canada.

“God saved my life… if I didn’t have more to do, I would be six feet under… there is more I have to do.” He talks about his desire to make others happy through laughter. If he can provide an escape from life’s stresses, and share a message that helps his fans, then he is happy.

The thing that got and convinced me that Lindon “Fatman” George can do a lot for others, is how he has dealt with his ailment. He laughs about how the stroke sneaked up on him, he lost relationships because of it, was left physically unable to do anything for himself for months, and on top of it all he was only 31!

There is so much to learn from this. You are never too young to suffer a stroke, a good support system of family and friends is crucial, the personal choice to get well, and as Fatman says, “Take your meds.” His own advice he’s following and on his way to recovery. An improved funny man who has gigs lined up already.

It was a tremendous chat I had with your premier funnyman. His humility is infectious. My ode to Lindon “Fatman George” is available at www.inpractopia.com.

NOW Grenada is not responsible for the opinions, statements or media content presented by contributors. In case of abuse, click here to report.
Tags: comedyFatman Georgegodhealthinpractopiainterviewkim jeanpodcast
Next Post