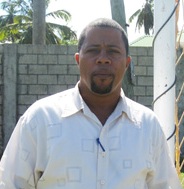 This story was posted 7 years ago
in Tribute
1 min. read

Senator Jester Emmons who represented the people of Carriacou and Petite Martinique in the Upper House of Parliament, passed away peacefully at age 45 on Thursday night at St Augustine’s Medical Services, according to a statement from the government.

“Prime Minister Dr. The Right Honorable Keith Mitchell has reached out to the family of brother Jester Emmons to convey his most profound condolences. Deputy Prime Minister and the Minister responsible for Carriacou and Petite Martinique Affairs, Honorable Elvin Nimrod, has also been in contact with the family and friends of the late Senator Emmons,” said in a statement issued by Press Secretary Kisha Alexander-Grant. The statement said that Emmons was a bright young star in the Senate, having being appointed to serve in the then new government by Prime Minister Dr. Keith Mitchell, upon assuming office in February 2013.

Before his Senate appointment, he was a teacher who was involved in various social activities, including sports. He is survived by his wife and children. His passing will result in a new appointment to represent Carriacou and Petite Martinique in the Senate.

NOW Grenada is not responsible for the opinions, statements or media content presented by contributors. In case of abuse, click here to report.
Tags: carriacoujester emmonslinda strakerparliamentpetite martiniqueprime ministersenatesenator
Next Post