Spar, But Take Care of Nation’s Business in Senate

Spar, But Take Care of Nation’s Business in Senate

On the evening of November 13, Prime Minister Dr Keith Mitchell announced a few changes to his ministerial and senatorial appointments. Cabinet reshuffles are great focal points for discussions; no different to the hullabaloo that is generated after the results of the Carnival Queen Show, Panorama, Soca Monarch and Calypso Monarch competitions. Today, many Grenadians have forgotten who won those competitions that were held just three months ago.

Despite what is said at the moment of any cabinet reshuffle — whether it occurs in Grenada or in countries elsewhere — no one has a clue how it would work. Some appointees perform as expected; while others may over-perform or under-perform.

In the aftermath of the specific case of last Thursday’s reshuffle by Dr Mitchell, it brought out the expected opposition from detractors of the Prime Minister, his government and his New National Party. They queried everything; from the presentation of the speech, to its content, to claiming that the reshuffle “makes no sense’’.

It’s laughable that some of the same opposition activists, who were dismissive of Nickolas Steele and Alexandra Otway-Noel being given ministerial posts in the first place in 2013, after the NNP’s general election victory, are now singing the praises of Steele and Otway-Noel. Clearly, one wonders whether their comments now are not simply another opportunity for playing politics for politics’ sake.

As well, public discourse on issues of government and state often also brings out some deep-seated notions and prejudices, sown over hundreds of years of slavery, colonialism and neo-colonialism. Some may not be aware, or even admit, that they hold these prejudices. But, they have preconceived notions of who should hold certain cabinet portfolios or other high-profile jobs, seemingly based on underlying feelings towards others based on superficial ideas of what the job-holder should look like.

So, for example, a criticism of businessman Nickolas Steele having now been appointed Health Minister, and Clarice Modeste taking up the Foreign Minister’s portfolio, is criticism for criticism sake at this point in time. There is nothing that prevents either from performing effectively in their new roles. And, it’s not an unprecedented move. Others, with non-medical training, have served as Grenada’s Health Minister. They include Karl Hood under the former National Democratic Congress government of Tillman Thomas; and Chris DeRiggs during the People’s Revolutionary Government of the late Prime Minister Maurice Bishop.

For many, their interest in Dr Mitchell’s speech was piqued by the appointment of two new senators: Chester Humphrey and Peter David.

“Peter David is an experienced politician, having served two terms as MP and as a very successful foreign minister. In recent months, he has also been a very useful new member of our party, and he has shown the ability to help government articulate its objectives and its policies going forward,’’ Prime Minister Mitchell said.

“The other new member of the Senate will be brother Chester Humphrey — our most experienced senator since independence. Mr Humphrey served for over 20 years as the labour representative in the senate, and has acted as President on previous occasions,’’ the Prime Minister added. “He knows the workings of the body as good as anyone. The appointment of Brother Humphrey is consistent to a long-held policy of this government that one does not have to be a member of our party to be given such a position….The addition of both Mr David and Mr Humphrey in the Senate shows our commitment not only to talk the talk, but walk the walk of inclusion.’’

Caribupdate Weekly fervently believes that all Grenadians — whether NDC, NNP, GULP, NUF or independent — want the best for our Tri-island State, and would like to see expedited growth and development. Where we differ, clearly, is on the route to arriving at where we want to and ought to get; we different on the route to the destination.

Humphrey, David, Nazim Burke, Ray Roberts, Keith Clouden and Christopher DeAllie—they all want the best for our nation; we have absolute no doubt about that. The upcoming session of the Upper House of Parliament should be lively as these senators and others interact and debate.

Humphrey is the President-designate of the Senate. For many years, he was a trade union colleague and mentor of sorts to Senator Roberts. The comradeship between the two has suffered over Humphrey’s fallout with the NDC; a party to which Roberts shares an affinity.

Then, there are Burke and David who have known each other for years as GBSS students, fellow lawyers, NDC executive members and cabinet colleagues. They, too, have gone their separate ways. David was expelled from the NDC in 2012 by a group in the party aligned to Burke, whom they were positioning to become leader of the National Democratic Congress. Burke officially took over the leadership from Tillman Thomas in February and David joined the NNP earlier this year.

These senators must try their utmost to put their political differences and grudges aside and keep uppermost in their minds that they are in the Senate to take care of the nation’s business; to pass laws and offer solutions to finding ways of providing more jobs, housing, healthcare and other services to the Grenadian people.

Senators, even as you spar, we expect more light than fire in the Upper House of Parliament.

NOW Grenada is not responsible for the opinions, statements or media content presented by contributors. In case of abuse, click here to report.
Tags: cabinetchester humphreypeter davidprime ministerreshufflesenate
Next Post 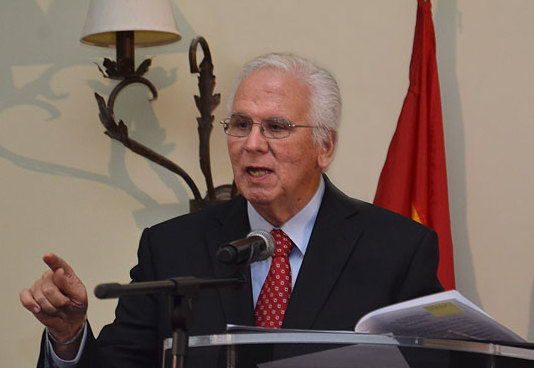 The Model is Broken