This story was posted 8 years ago
in Tribute
6 min. read

On behalf of the Prime Minister and Minister of Finance, the family of the Ministry of Finance, public servants (past and present), I express our profound sadness at the passing of Lauriston F. Wilson Jr, OBE and extend our heartfelt condolences to his dear wife, children, relatives and friends.

Psalms 46.1 declares “God is our refuge and strength, a very present help in trouble”.

Today, I verily declare, without fear of contradiction, that: Lauriston Wilson Jr was a refuge and tower of strength; a very constant help during many times of trouble in Grenada.

During the tumultuous years of the 1970s, he was there.

During the breathless period of the revolution, he was there, albeit, after recall.

During the period of the interim council which he served as Secretary, he was there and provided stellar support to the chairman, Sir Nicholas Brathwaite and all the members (some of whom are present today).

During the period of return to parliamentary democracy from 1984–1990, he was there.

Mr. Wilson was truly a man for all seasons.

In 1985, his contribution to Grenada’s development was formally recognized when he was conferred with the honour of Order of the British Empire (O.B.E.).

No one can serve so high, so long and so well, without making sacrifices (personal and family). To Mrs. Wilson and his entire family, a grateful nation says thank you for his service and your sacrifice to help build our nation. Thirty six (36) years of dedicated and distinguished service,

I offer this tribute with somewhat of a disadvantage–I never worked directly with Laurie, as he was affectionately known. Indeed, he retired two years before I joined the Ministry of Finance. That acknowledged, as someone who has sat in the seat of Permanent Secretary, Finance for a considerable period of time, I do have a unique perspective of the job and some of the challenges he faced.

In putting this tribute together, I received a key contribution from Maureen Baptiste who was Mr. Wilson’s secretary and who rose up the ranks to Deputy Permanent Secretary.

I also sought the views of the remnant – the few left in the Ministry who worked with Mr. Wilson. When asked the question: “in a word or sentence, how do you remember Mr. Wilson”? Here is what they said:

This one from a Treasury Officer:

When cash flow was not favourable, Mr. Wilson knew how to “pass the buck”. He would soothe an anxious claimant by calling the Chief Treasury Officer in the person’s presence and instructing him to pay. After the grateful and hopeful person left his office on the way to the Treasury, he would reverse his instruction by calling the Chief Treasury Officer with very clear instructions “do not pay”. On arrival at the Treasury, the expectant claimant would then be given the disappointing news that the payment was not yet ready. The poor Chief Treasury Officer would then incur the wrath of the disappointed claimant who had just heard him receive clear instructions from Mr. Wilson to pay.

Before I continue, I must advise this is not a current practice in the Ministry of Finance. That said, I have some sympathy for Mr. Wilson who as the P.S. Finance was constantly inundated with calls and demands to pay, at every turn, including when visiting the market and supermarket.

My personal interactions with Laurie (post retirement) were limited but they were always pleasant and encouraging.

Laurie was a very decisive man. I recall he once told me he liked to make his decisions fast. I asked “why so? He replied with a big smile” so I could change my mind if I have to”.

Mr. Wilson is well-known as an enforcer of rules but he was also an encourager.

On one occasion we met, he reflected on how the job of PS, Finance had grown in complexity since he retired. He referred to the mounting regional and international obligations and meetings, in addition to the pressing domestic issues. He looked at me with a wry smile and said “but you can handle it”. Coming from the most long–serving PS Finance, his words encouraged me.

On another occasion, he commented on the extensive public consultation that now precedes many government policies and the active role of the Ministry of Finance in that regard. He then said, “Timothy, you are capable. You are doing are very good job”. Once again, he had encouraged me.

Mr. Wilson was a very dedicated and disciplined public servant and he expected no less from his staff.

Mr. Wilson is known as a stern, no-nonsense man but he also loved to socialize. Maureen recalls the all-day party they had at BBC Beach House. She also recalls another occasion when a beach lime was rained out. Mr. Wilson quickly moved the party to his house and they had a good time. I understand that the place was not left in a good condition. On behalf of all present, I ask Mrs. Wilson for her forgiveness even though I was not there.

Laurie loved the sea. Each morning before he went to work, he headed for Grand Anse Beach for his swim. It is not by accident that we are gathered here today, not far from his beloved Grand Anse Beach. He told some of his staff that he got his daily inspiration during his time in the sea.

Speaking of his discipline and attention to his health, one of his favourite drinks was Sanatogen mixed with Honey. Bryden and Minors can attest to this fact. Each day, he drank at least four glasses of Sanatogen and Honey. Indeed, the preparation of this drink was a daily task for his secretary.

Laurie could be combative such as in 1983 after the Revolution when he was invited by the Deputy Prime Minister and Minister of Finance to take some vacation, a pretext to remove him from his post.

The Minister in a letter to him suggested that he, Laurie seemed tired and could benefit from some rest.

Laurie, in writing, firmly replied “Mr. Minister, I go to the beach and swim every day. I have never been in better shape”. The rest is history, Laurie was recalled before very long to deal with matters as only he could, and, frankly, only he knew. Indeed, he was an institution.

Here lies one of the most durable public servants in Grenada’s history.

Even as we mourn his passing, we celebrate his life’s work in building our Nation.

Today and forever, we celebrate the contribution of Lauriston Wilson, Jr. and honour his memory. May his work as a public servant, par excellence, inspire us all. Indeed, may we recommit ourselves to the lofty and noble cause of nation building.

NOW Grenada is not responsible for the opinions, statements or media content presented by contributors. In case of abuse, click here to report.
Tags: funerallauriston wilsontimothytimothy antoinetreasurytribute
Next Post 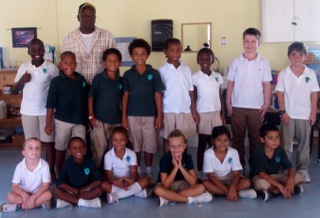 Over $1000 Raised by School Children