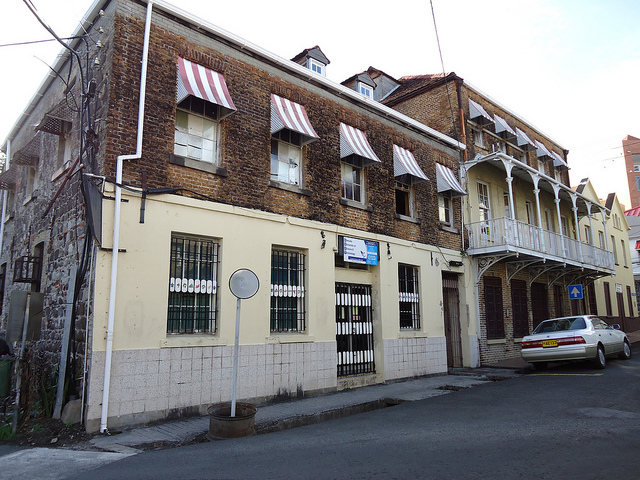 This story was posted 7 years ago
in PRESS RELEASE
5 min. read

Principal of the Grenada University of Science and Technology (GUST), Dr. De Vere Pitt, has confirmed that the University, which was known formerly as the Grenada Research Institute, will be reopened next year.

Dr. Pitt pointed out that while some classes were held during 2014, the university was not fully operational owing to a number of challenges and difficulties. He however stressed that with a number of shares being bought by persons vested with an interest in seeing the increased of tertiary education in Grenada and some faithful contributors, things are being put in place to ensure a fully operational university in 2015. The Founder and President disclosed that in the New Year, classes would be held for six days a week. He said that with the current economic challenges that many are faced with, tuition fees have been set at the minimum possible, so as to have ensure that every person can attain a tertiary education, as they seek to compete effectively for jobs both locally and regionally.

“We have devised a plan to offer tertiary education at the lowest possible cost. Therefore, several programmes would be offered in the New Year, as we recognise that training and higher learning is another avenue of addressing economic challenges,” he said.

Dr. Pitt said that this approach is geared at reuniting the partnership that his university once held with the general public. He pointed out that this partnership that GUST University has with the public is geared towards strengthening the already good relationship that they had established some years ago. He noted that to ensure that all can access the programmes being offered by the University, a number of centres have been earmarked across Grenada to administer the programmes, adding that the best-qualified personnel have already been recruited to administer these programmes. “While we are providing tertiary education at a very low cost, we have also secured some of the best lecturers, as we are of the belief that you can get higher learning of a greater quality for a minimal cost, and that is what GUST will be doing,” he stressed.

The former GBSS and TAMCC principal further stressed, that despite the increased financial and other challenges that his institution has been faced with over the past few years, it has not meaningfully affected some of the excellent partnerships and relationships that he had established with a number of prominent institutions worldwide.

The University founder said that currently a number of students from several Caribbean islands have been expressing an interest in pursuing higher and tertiary education at the university. This, he said, has resulted with the university having discussions with a major IT company in the United States, with a view of administering its online programmes. “We have recognised that while it would be nice to have the 200 to 500 students come to Grenada to attend classes, it would be more effective and beneficial to have them attend classes online, thus it would result in significant financial savings for them and that is a focus of the university, is to provide tuition as minimal as possible,” he said.

He added that, as such, with the increased interest being expressed, it has forced the university to consider a number of innovative initiatives as it seeks to hasten the reopening of new classes. “We are cognisant of the cries and concern,s both locally and regionally, thus we have sought to provide the platform that students would like to have, so that they can pursue their higher learning education at very affordable costs. This has resulted in us making a decision to recommence classes, while ensuring that the university is fully operational for the New Year. We will also be offering a number of short programmes. There is an urgent need to provide an option to both St. Georges University (SGU) and the TA Marry Show Community College (TAMCC),” he declared.

Dr. Pitt pointed out that based on the university’s track record, he foresees more prominent and popular regional and international learning institutions getting on board in recognising its certification. As such, he said that he hopes that the Government of Grenada would recognise the focus and mission of the university, thus granting it accreditation so as to ensure that persons pursuing studies at GUST can be able to effectively secure jobs and or higher academic pursuits. “The University was thrown into a dilemma some years ago when the Ministry of Education, through the then Minister, without prior warning or evidence, sought to discredit our certification, resulting in a number of students then losing faith as they were made to believe that our certificates were no good,” Dr. Pitt said.

He said that the actions of the Ministry of Education was the primary reason for the fallout of students that it suffered when it was forced to stop classes. “The University has regrouped and is trying to pick up the pieces from the actions of the MOE, so that it can continue its original mandate.”

When asked about the teaching staff at GUST, Dr. Pitt commented, “lecturers are well grounded in their particular area, and therefore the quality level of learning that the students would receive is worthwhile, and posses proven teaching expertise,” he said.

The classes, according to Dr. Pitt, will be kept in GUST centres, adding that currently there are two in Grenada, with a third slated to be open in Carriacou. When asked why a potential student would be interested in the programmes being offered at GUST, Dr. Pitt said that the programmes can be considered as being given almost free of cost. He added that with the relaunch of the university, it would provide a platform for students to garner the necessary tertiary education and qualification, which will result in better jobs for them.

He asked why someone would choose to spend large sum of monies on tertiary education, when they can get quality education at a far cheaper cost. He further expressed confidence that as the region battles economic challenges savings in every possible way, even education would be embarked upon, and GUST is providing another opportunity to still pursue tertiary education without having to invest significantly financially.

NOW Grenada is not responsible for the opinions, statements or media content presented by contributors. In case of abuse, click here to report.
Tags: degreeeducationgustschoolsciencetechnology
Next Post