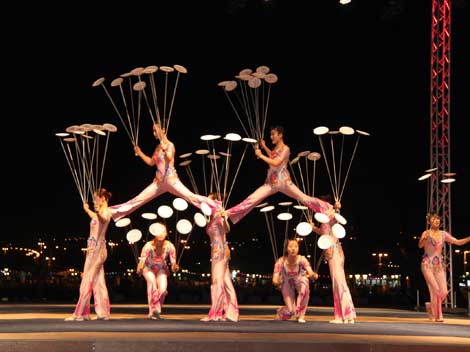 An internationally acclaimed acrobatic troupe from Chongqing City, China is expected to display its talent in an Acrobatic and Magic Show at the Grenada Trade Centre on 16 February 2015, from 7 pm.

The show, which is being hosted by the Embassy of the Peoples Republic of China in Grenada, in conjunction with the Ministry of Culture and Heritage, is free of admission and will display 12 performances including; Jar balancing, Chinese Kung Fu Combat, Comic Acrobatic and Magic Rings.

The Chongqing Acrobatic Arts Troupe (CAAT) is one of the most outstanding acrobatic troupes in China and prides itself as being the first arts troupe to begin merging acrobatic gymnastics, Chinese operas, folk dance, ballad and music into the acrobatic performance.

The CAAT has covered more than 400 cities in over 70 countries and regions and has put on more than 4000 performances reaching audience of over 8 million.

NOW Grenada is not responsible for the opinions, statements or media content presented by contributors. In case of abuse, click here to report.
Tags: abrobaticacrobaticsartcaatchinachinesechongqingculturemagictalenttroupe
Next Post