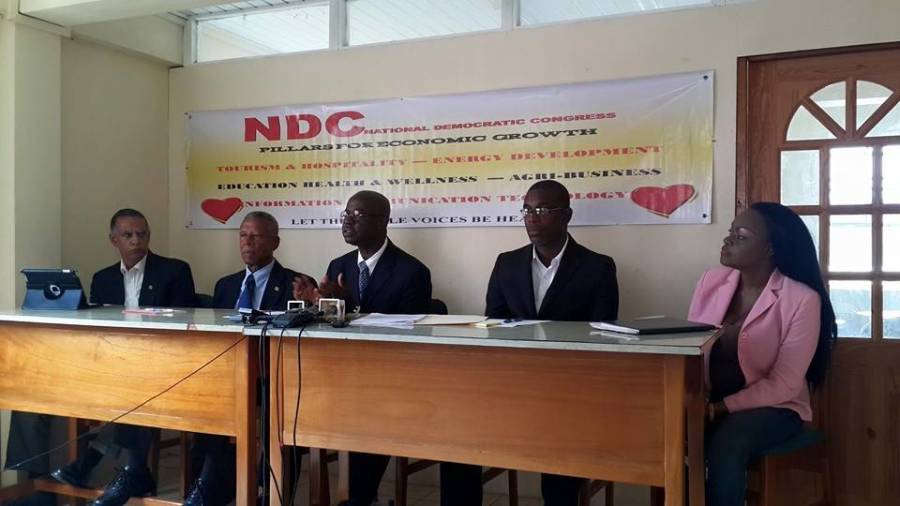 This story was posted 7 years ago
in General News
8 min. read

Re: Notice of Withdrawal of Membership of NDC from Constitution Reform Advisory Committee

I write to you in my capacity as Political Leader of the National Democratic Congress (NDC) to advise you as follows:

After due and careful consideration of what has transpired and continues to occur in the ongoing Constitution Reform Process, we of the NDC have determined that we can be of no further practical assistance to your Committee in the fulfilment of its mandate.

We base our decision on the following considerations:

i. That a limit be imposed on the period during which any one person can remain prime minister of Grenada to no more than two consecutive terms;

ii. That there be a fixed date for holding general elections in Grenada every five years;

iii. That a system of proportional representation be introduced to go along with the first past the post system for choosing parliamentary representatives;

iv. That the parliament of Grenada be instituted as a single chamber (house) instead of two chambers (upper and lower house);

v. That the constitution provide that Grenada has an official opposition leader at all times regardless of the number of seats won by any one political party; and

vi. That the Governor General of Grenada be chosen by an electoral college of parliamentarians from the parties represented in parliament rather than by the prime minister alone.

i. Of the six (6) matters recommended by previous Constitutional Reform Commissions and Bodies only one was recommended to the Cabinet as previously recommended, that is, the matter of the election and tenure of the Governor General.

ii. The proposed term limit for the Prime Minister was extended from two to three terms without offering a reason or justification for this recommendation

iii. The idea of amending the constitution to provide for a fixed date for holding elections was rejected by the Committee. Instead, the Committee recommended that any such provision must be done by way of an ordinary Act of Parliament. It must be clear to the Committee leaders that such an approach would effectively give the Prime Minister the power to amend, indeed repeal such a law as he/ she pleases once his party commands the majority in the parliament.

iv. The issue of Proportional Representation was categorically rejected by the Committee and was not recommended to the Cabinet in any form.

From the very outset of this process, the NDC took the position that we will support Constitutional Reform that is meaningful and that will result in a real and meaningful improvement in the operation of our democratic system.

We embraced the Project’s mission, as articulated in the Project Document which is, inter alia, “to engender an environment conducive to reform of the Grenada Constitution Order 1973, with the direct consultation of, and participation by, the people of Grenada and thus make a national Constitution which has the tangible input of the people, so as to build better bonding between the people and the Constitution”.

We fully endorsed the project scope and purpose as set out in the Project document which is “to conduct public consultations on the Grenada Constitution with the citizens of Grenada, Carriacou and Petite Martinique at home and in the Diaspora. This will provide opportunities for citizens to contribute to the revision of the governing fundamental laws and rights. In addition, it will address major gaps and ambiguities identified by the 1985 and 2006 Constitution Review Commissions of Grenada and incorporate the advancement of fundamental human rights and standards.”

Sir, we submit that the achievement of these laudable objectives requires an open, transparent and consultative process. In our view, what has transpired to date in the Constitution Reform Process demonstrates a failure on the part of the Committee to subscribe to the required standard.

In the circumstances, we hereby serve notice to you of our decision to withdraw from membership in your Committee with immediate effect.

We take this opportunity to thank you for allowing us to serve on your Committee and wish you and your Members every success in your endeavour.

NOW Grenada is not responsible for the opinions, statements or media content presented by contributors. In case of abuse, click here to report.
Tags: cabinetconstitutionfrancis alexisnazim burkendcreferendumreform
Next Post

Where are the Jobs Increasing?