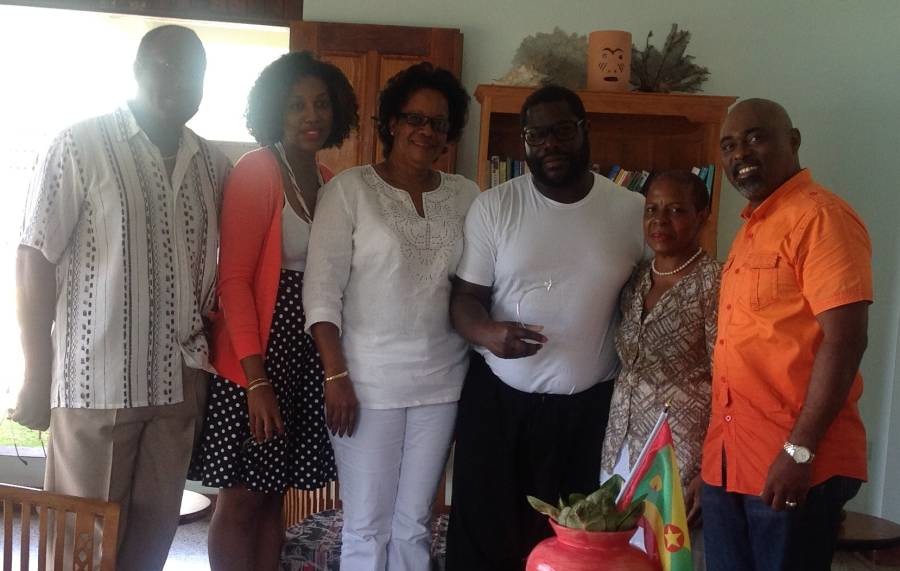 Almost two months after the announcement was made that he will be awarded by the National Celebrations Committee for outstanding performance in the field of culture, award-winning film producer Steve McQueen received his award.

Culture Minister, Senator Hon. Brenda Hood and Tourism Minister, Hon. Yolande Bain-Horsford were among a delegation who attended a presentation ceremony at the Kalinago Beach Resort last weekend to deliver the award to McQueen. He was one of 16 persons and the only overseas-based Grenadian to be recognised by the NCC during the 2015 Independence Celebrations. Persons were awarded for their contributions played in national development or raising the profile of Grenada in various fields such as culture, sports, business and community development.

McQueen, who is of Grenadian parentage, was on the island  to do a video shoot for the upcoming 56th Venice Biennale 2015 International Art Exhibition, considered the oldest, most important and prestigious art event in the world.

Grenada, for the first time, will be participating in the Exhibition through the Grenada Arts Council. The date for the Biennale is 9 May through 22 November.

NOW Grenada is not responsible for the opinions, statements or media content presented by contributors. In case of abuse, click here to report.
Tags: filmIndependence awardlinda strakerproducerssteve McQueen
Next Post