Uniformity of the RGPF

Uniformity of the RGPF

Despite the Royal Grenada Police Force (RGPF) servicing the citizens and visitors of Grenada, Carriacou and Petite Martinique reasonably well over the years, and must be highly commended for maintaining a low level of crime on the islands in comparison with others in the region — there is still a need for improvement, especially in regards to the uniformity of the police vehicles, which can only add to a higher level of professionalism in the services that it provides to its citizens and visitors.

My intentions here are not meant to be political, since this issue can be easily misconstrued or taken out of context and be misunderstood by some. In fact, every government that came into existence never seriously dealt with correcting or addressing the police vehicle uniformity problem. In fact, all are guilty of compounding the problem — or maybe it might be more appropriate to blame the past commissioners of the Royal Grenada Police Force for not addressing the issue appropriately and ensuring that a higher level of professionalism is attained. When it comes to the uniformity of the police force, we cannot and should not put all the emphasis on only the personal attire of the police officers and disregard the uniformity of the police vehicles. In fact, one should complement the other, which will show better organization and some form of synchronization of the entire department.

As a patriotic and concerned citizen, I am deeply concerned about the lack of uniformity of the Royal Grenada Police Force vehicles. In fact, it is common practice that professional law enforcement departments adopt a standard by which their vehicles must be identified — which is usually by the colour and pattern in which the vehicles are painted along with the crest of the institution it represents. However, in Grenada anything goes and apparently there is no standardized mechanism by which the RGPF vehicles are identified. In fact, vehicles with different colours are used to do police work, which is highly unprofessional and confusing, especially to visitors who are accustomed to organized police departments. In fact, we are lucky that our police officers are not inclined to criminal activities like in some countries — where the vehicles are unidentifiable, corrupt police officers can abuse the system and commit criminal offences. Worse yet, criminals can also easily use vehicles and disguise themselves pretending to be police officers to commit crime, since the police vehicles can be easily misrepresented.

Indeed, one has to consider exceptions where unmarked vehicles will be used from time to time by the RGPF for special covert operations, which is understandable — but for the majority of the vehicles within its arsenal there must be some kind of uniformity. A few orange strips on a few police cars or the word police written on a white van are not enough to enhance the RGPF’s image and professionalism. Interestingly though, it appears as though that the RGPF is comfortable with the idea of being undetected or disguised, which shouldn’t be the case except for certain situations. Generally, it must be visible to the public, which in itself is a deterrent to crime. However, in addition, different branches of the RGPF such as the SSU and RRU can adopt a different design for its vehicles, but then again that section of the RGPF must have its own standardized design for the vehicles assigned to that particular branch. For example, in Barbados the SSU uses a dark-blue colour vehicle, but the crest of the Royal Barbados Police Force (RBPF) along with the fluorescent yellow strips can be visibly seen on the vehicle.

Once we are seriously pursuing tourism and expect more and more tourists to visit our shores, then we ought to take these issues very seriously, especially as the world continues to become more and more dangerous with growing terrorism and extremism on a global scale. In fact, some economists argue that before any investor decides to invest in any country, their first priority isn’t necessarily the profits that they can accumulate, although that too is important, but rather the safety and security for their family and businesses. That fact is sometimes overlooked by us. The national security of any country is of vital importance and deserves adequate attention. With persons from our neighbouring countries involved in terrorist activities by travelling to Middle Eastern countries to partake in extremism by fighting alongside ISIL, there are even more reasons why we should operate on a more professional level. Potential investors and tourists alike can easily be targeted and be at risk. We can be viewed as disorganized and a soft target, which can eventually have serious implications for our citizens, business community and tourist industry. In fact, already the US military is voicing its concern about the involvement of Caribbean nationals in fighting for ISIL in Syria and Iraq and who are returning to the Caribbean. It is important to note that the US is one of our major tourist markets, so therefore the ramifications can be devastating and disastrous to the tourist industry, should our tourists suffer any terrorist attack.

Interestingly, some well-established private security firms on the island exhibit a higher level of professionalism where their vehicles are easily identifiable due to its uniformity. Their vehicles are usually well-kept and easily identifiable due to the uniformity. The colour, design, and the crest of the company are identical and identifiable. Credit should be given to those professional security firms for lifting the standard. This will no doubt eventually put some pressure on the RGPF to follow suit.

Likewise, Her Majesty’s Prison Grenada (HMP) is also guilty of the folly and needs some form of cohesion and uniformity with its vehicles. Ordinary buses which were designed to carry regular passengers are used to carry prisoners to and from prison. This in itself is a major breach of security, which can have serious negative implications for the country’s national security. The HMP needs to ensure that vehicles which were designed for carrying prisoners be used.

If we don’t take these pertinent issues into consideration and make the necessary changes now, then visitors and tourists can be easily confused and be misled into thinking that there is a lack of security in the country while their lives could be at risk. Furthermore, even the sirens and flashing police lights affixed on the police and HMP vehicles must be included in lifting the standard, image and professionalism of the force. There is so much to be done!

NOW Grenada is not responsible for the opinions, statements or media content presented by contributors. In case of abuse, click here to report.
Tags: corruptioncrimeisilpoliceprisonRBPFrgpfrruSSUterry noeluniform
Next Post 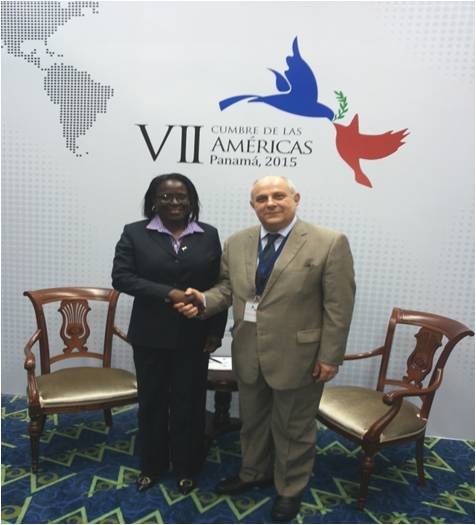