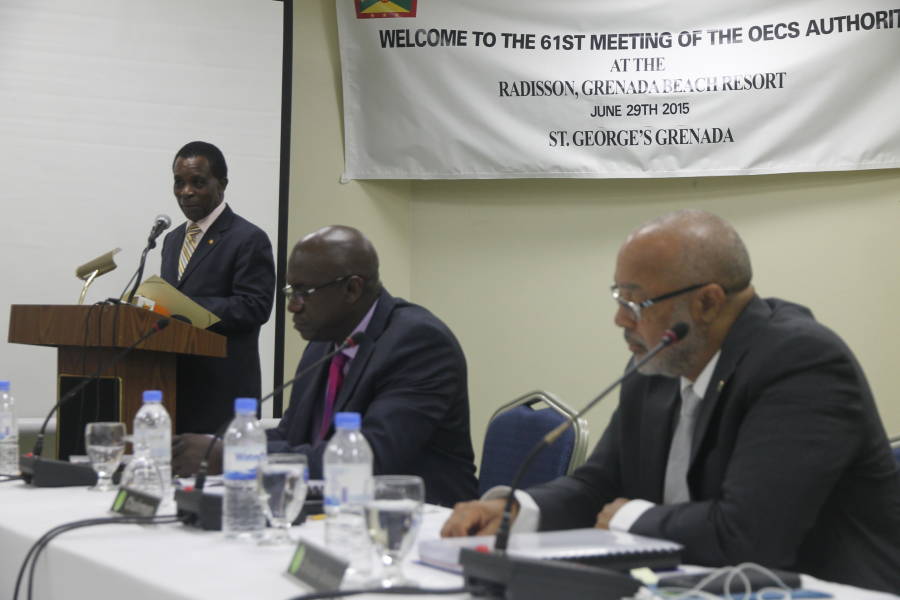 The recent action by the European Union to blacklist a number of states in Caricom, was on Monday described as by the OECS Authority as “illegal” because the persons who created the list have no authority to make such declaration.

“This is an illegal list. The persons who created this list have no authority to do so,” said Dr Didicus Jules, Director General of the OECS Commission during a news brief following the one-day OECS authority meeting, which was held in Grenada on Monday at the Radisson conference room.

“We are going to aggressively pursue to get this removed,” said Prime Minister Dr Keith Mitchell, who took over the chairmanship of the Authority from Dominica’s Prime Minister Roosevelt Skerrit as of Monday. ‘This came as a big surprise to us. We were not warned or given any notice of such pending action,” he said, while confirming that the affected OECS members will be taking their case to Caricom for discussion at its upcoming meeting in Barbados.

OECS members on the blacklist have already individually written to the EU, registering their objection which is based on, inter alia, inaccurate data and erroneous information.

The Heads are concerned that this unwarranted and unjustified attack on the well-regulated financial sector of OECS Members, is already leading to negative implications for the corresponding banking relationships and the generally negative impact of investor confidence; as well as a safe, compliant area for financial services.

Dr Mitchell said that very recently, the OECD Global Forum and the FATF, as authorities on tax compliance, have repeatedly taken an opposite view of the financial services in the OECS; that is, recognizing their bonafide standing as sound, credible and internationally compliant.

“Most of the countries who are complaining against us, we don’t even do major business with them. The countries we do business with have not blacklisted us, but those that we do very little with are doing this,” he said, while describing the methodology as flawed.

Antigua and Barbuda’s Prime Minister Gaston Browne, said that affected OECS Member States had executed the required Tax Information Exchange agreements as required by the Global Forum, and had been found to be substantially compliant with the required standards.

He confirmed that the decision was taken during that meeting, that the OECS nations affected will be issuing a joint letter/communique to the European Union Commission on Economic Affairs and Taxation, imploring them to take action to repair the damage which this ill-conceived and misleading blacklisting has caused on the financial services sector of the OECS.

On 18 June 2015, the European Union published its first list of international tax havens as part of a crackdown on multinational companies trying to avoid paying tax.

NOW Grenada is not responsible for the opinions, statements or media content presented by contributors. In case of abuse, click here to report.
Tags: blacklistcaricomdidicus juleseueuropefatfglobal forumkeith mitchelllinda strakeroecdoecstax
Next Post