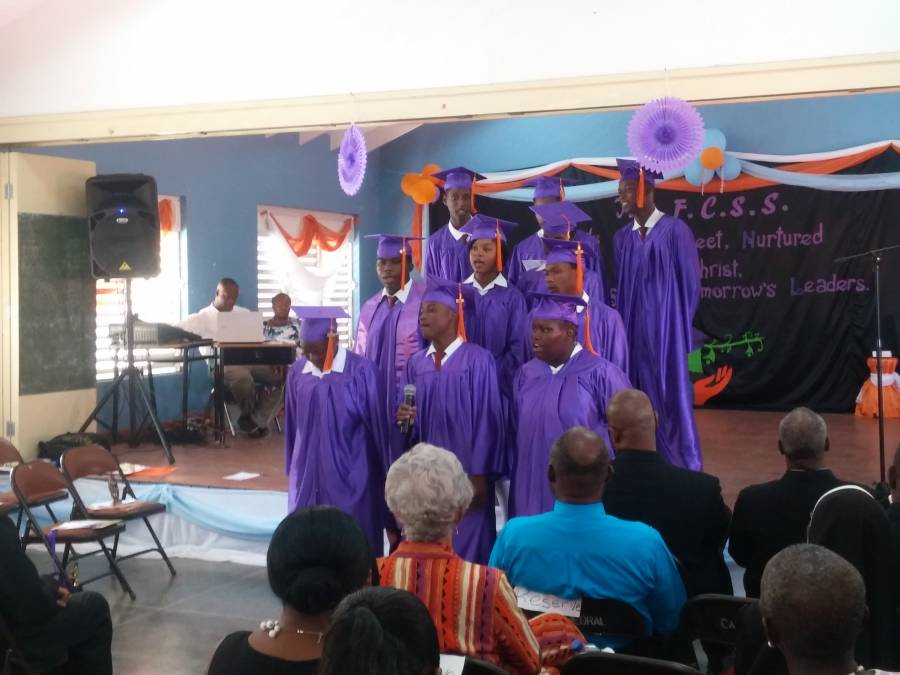 This story was posted 7 years ago
in Education
5 min. read

Three years ago it became Grenada’s newest public secondary school amidst a storm of controversy and concerns, but when its first graduating class took their seats on 25 June 2015, it was a proud moment as the negative emotions and doubts were replaced with the excited, positive spirit of cheerfulness and joy.

Sitting among the audience of the first graduation ceremony of J W Fletcher Catholic Secondary were former Government ministers and Catholic officials, who were instrumental in converting the former primary school to a secondary institution of learning under the management of the Catholic school.

“I felt very proud of the students and their achievement. I am very delighted to see the progress the school has made. As you know, at the time of opening this school we were responding to a need to reduce on the amount of overcrowding at secondary schools within St George’s area,” said Former Education Minister Franka Bernardine.

“I knew in the long-term that this institution would have filled a void, so despite the challenges in making it a reality, it’s one of the things I feel very proud to have established,” said Bernardine, who also paid a significant role in establishing the Programme for Adolescent Mother, which facilitates the education of young mothers who have to drop out of formal secondary school system due to pregnancy.

“Some of the schools were jam-packed with students, and in keeping with Government policy of giving each child the opportunity to have a secondary education, we had to come up with a solution, and that primary school was experiencing continous decline in population,” she recalled.

Teacher at the school, Glen Alexander, explained that the 10 graduates were all students who transferred from other secondary schools. “A decision was made to start with a minimal number of students, and grow the school population. The students who were placed in form three were students from secondary schools who were transferred for various reasons, and today we are proud of what they have achieved so far,” he said. The form two students were also transferred, while the form one students were successful 2012 CPEA pupils.

Students sat between five and nine subjects. “We are looking forward to the results because we believe that our students can and will do very well,” said Alexander. The first valedictorian was Akim Williams, who was transferred from the Grenada Boys Secondary School. “I am truly honoured to be wearing the cap of Valedictorian, as I reflect on what has been an experience of a lifetime,” said the young man, who is awaiting the result of his nine subjects.

“Our journey at this institution began in September 2012, under the sound leadership of Mr Elvis Morain, or “Jack” as we called him. Mr Morain was an avid storyteller. He always had a story that would inspire the most worthless-minded of us. He was a risk-taker who made decisions that sometimes only he believed would work. I can vividly remember him perusing the school compound, pulling up on students’ misbehaviour,” he recalled.

Morain, who is now the Acting Chief Education Officer, but was unable to attend the graduation ceremony, was described by Williams as “forthright and sound, and sometimes the most colourful of words would resound from his mouth.”

Williams said that the students were teased and belittled by former classmate, and nothing was as bad as when some of them had to return to their old schools to pick up transfer slips. “The comments about our uniform were indeed petty, now that I think about it. But one day we had enough, and we travelled together across the Carenage, proudly in our uniforms. It was then our bond was formed, and there I knew there was no other group of persons I would have rather spent the last 3 years with,” he shared.

Reminding his classmates that they have created history for the school by becoming the first graduating class, he proceeded to leave them with 10 Commandments to Success. They are:

He urged his classmates to always have a vision and a dream. Over the next few years, you may end up at college or begin working full-time. No matter what your dreams are for the future, remember you can get there with the dedication, determination, and focus that you would have learned while here at J W Fletcher Catholic Secondary School,” he asserted.

“Class of 2015, we are “Seeds of prospects, nutured in Christ, blooming tomorrow’s leaders.” Indeed, we will push boundaries to make this world a better place, even in small ways. Always remember where you came from. Make the most of yourself, by fanning the tiny inner sparks of possibility into flames of achievement,” he said.

The Acting principal of the school is Laurel Bartholomew, who is supported by a group of competent teachers.

NOW Grenada is not responsible for the opinions, statements or media content presented by contributors. In case of abuse, click here to report.
Tags: Akim Williamseducationfranka bernardineGlen Alexandergraduationj w fletcherlinda strakerschoolsecondaryvaledictorian
Next Post

Disparity and Neglect at the (Mirabeau) Princess Alice Hospital