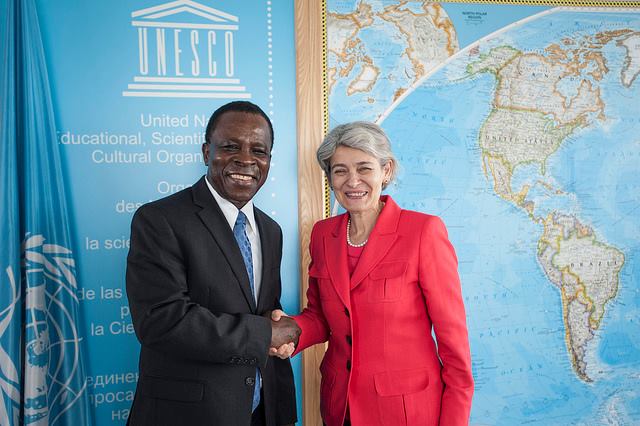 This story was posted 6 years ago
in Technology
3 min. read

On 22 July 2015, the Rt Hon. Dr Keith Mitchell, Prime Minister of Grenada and current Chair of the Organization of Eastern Caribbean States (OECS), paid a visit to the United Nations Educational, Scientific and Cultural Organisation (UNESCO) in Paris, France.

During his meeting with Ms Irina Bokova, Director-General of UNESCO, he had the opportunity to underline the high priority given by Grenada, and the Small Islands Developing States (SIDS), in particular OECS and Caribbean countries, to the issues pertaining to climate change and to the follow-up on the outcomes of the Third International Conference on Small Island Developing States (SIDS) held in Samoa, as well as to the process leading to the forthcoming Conference of State Parties on Climate Change (COP 21) hosted by the Government of France in December 2015. The Director-General recalled that Small Island Developing States constituted a “real and strong priority” for the Organization underscoring that “UNESCO stands as a true spokesperson for climate change, oceans, coastal hazards and marine biodiversity issues, among others, on the international scene”.

The Prime Minister stressed the key role that Science, Technology and Innovation (STI) Policies can play in the economic and social development of the Caribbean countries, advocating for enhancing the teaching of sciences in the region in order to increase people’s outreach opportunities and sustain youth employment. In response to Prime Minister Mitchell’s call for support in mapping STI in Grenada, the Director-General replied positively indicating that UNESCO will assist Grenada in preparing a policy that takes the regional approach into account. “

The Prime Minister also emphasised the role of the Information and Communication Technologies (ICT) as a basic tool for empowering the people and in particular in the education of youth.

The Director-General and the Prime Minister also discussed the importance of cultural heritage preservation and the needed efforts for improving the representation of Grenada on the UNESCO World Heritage List, in particular through the support of the organisation for the Follow-Up of the Grenadine Islands Group Upstream Process for the trans-boundary site in Grenada and St Vincent & the Grenadines and the Draft nomination dossier for the St George’s Fortified System.

The Prime Minister also recalled the importance he attachés to regional cooperation and the expected support from the Organisation for Capacity Building and Fund Raising for the implementation of the already submitted and the future projects for the region.

During the discussion, the Director-General mentioned the good cooperation installed with the Permanent Delegation of Grenada to UNESCO headed by HE Dr Hamza Alkholi, Ambassador and Permanent Delegate of Grenada to UNESCO, and the importance of having the representative of Grenada as Chairperson of the UNESCO Intergovernmental Information for All Programme (IFAP), the first SIDS representative chairing this programme.

In concluding, the Director-General presented Prime Minister Keith Mitchell with the UNESCO 70th anniversary commemorative medal as a gesture of appreciation for his visit and support to the Organisation.

The meeting was also attended by the Deputy Director-General, Mr Engida Getachew, and Ms Chafica Haddad, Deputy Permanent Delegate of Grenada to UNESCO.

Following the meeting, Prime Minister Mitchell was informed that UNESCO has allocated funds for the implementation of a project in Grenada under the title: Support to Capacity Building in Information Literacy through the development of e-infrastructure for online and distance learning in Grenada.

NOW Grenada is not responsible for the opinions, statements or media content presented by contributors. In case of abuse, click here to report.
Tags: developmentheritageictirina bokovakeith mitchellparissciencesidsstitechnologyunesco
Next Post

Grenada Promoted Across Europe and China