This story was posted 6 years ago
in Tribute
3 min. read 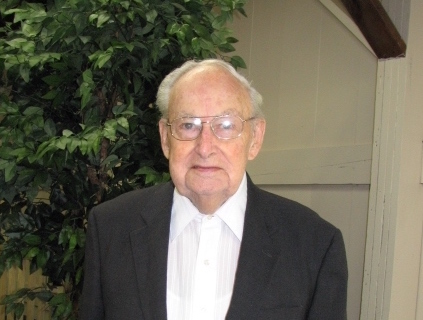 Reverend Melvin L Schaper departed this life on Sunday, 9 Aug. 2015, at Ochelata, OK, USA. Services will be held on Saturday, 22 Aug., at the Bible Holiness Church in Ochelata, at 10:00 am. Graveside services will be at 4:00 pm on the same day at Mount Hope Cemetery in Independence, KS. Visitation will be on Friday, 21 Aug., 6:00 pm, at the Bible Holiness Church in Ochelata as well. Davis Family Funeral Home of Dewey, OK, in charge of arrangements.

Melvin Louis Schaper was born on 30 Aug. 1920 in Troy, MO, the first child of Albert Henry and Willie Mae (Conley) Schaper. He grew up on the family farm and was his father’s main helper. He was allowed to begin High School at age 18 after his younger siblings were able to help carry the load at home. After graduation he went on to college, obtaining several degrees.

He later received an Honorary Doctorate of Ministries Degree from the College Department of God’s Bible School.

He was married to Carol Joy Firkins on 11 November 1948, in Downey CA, and they soon moved to Independence, Kansas, where they assisted in the founding of the Independence Bible School. Seven children were born into their loving home during their years at Independence; Nathan Louis, Ruth Elizabeth, Charles Melvin, Albert Keith, Stephen Neil, Quentin Philip and Kent Firkins.

In 2001, Reverend and Mrs Schaper were honoured by the Prime Minister and Governor-General of Grenada for their outstanding service in the field of education in their nation. He was also recently given a Lifetime Achievement Award by the Committee of the Grenada 2015 Award Week, as the Principal who had the most uplifting impact in Grenada during the decade of the 1970s.

One of the hardest days of his life was November 12, 2010, when God called his loving wife, Joy, home to heaven.

On 26 Oct. 2013, Melvin was united in marriage to Evalyn Rose Nielsen in Bethany, OK. For the last 22 months of his life, Evalyn beautified his home with her loving ways and beautiful paintings.

His first love, after God, was his family. He was a loving father, grandfather, and great-grandfather. He enjoyed gardening, travelling and spending time with family and many friends.

He leaves to mourn: his wife, Evalyn, of the home; 7 children, Nathan, Ruth, Charles, Albert, Stephen, Quentin and Kent; 5 daughters-in-law, Diane, Janette, Della, Lavonna and Pam; one son-in-law, Gary Schenck; 23 grandchildren; and 51 great-grandchildren, one sister, Irene Bergfeld, as well as many nieces, nephews, cousins and friends.

He also leaves his church family in both the U.S. and Grenada, as well as present and past students and faculty of the Independence Bible School, St John’s Christian Secondary School and God’s Bible School.

He was preceded in death by his wife, Carol Joy Schaper, his parents, one sister, Mildred Miller, three brothers, Benjamin, Albert Jr, and John, and one great-grandson, Austin Hollenbeck.